Canada In Decay: Mass Immigration, Diversity, and the Ethnocide of Euro-Canadians (Paperback) 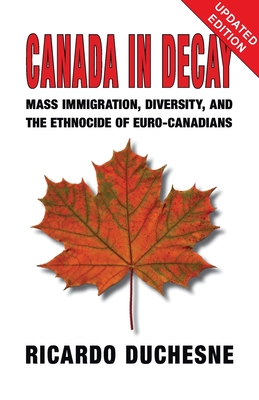 Canada in Decay is the first scholarly book questioning the undemocratic policy of mass immigration and racial diversification in Canada. This book demolishes the myth that Canada is a "nation of immigrants" by demonstrating that Canada was founded by Indigenous Quebecois, Acadians, and English speakers. This book exposes the rewriting of Canada's history in the media, schools, and universities, as an attempt to rob Euro-Canadians of their own history by inventing a past that conforms to the ideological goals of a future multiracial Canada. Canada in Decay explains the origins of the ideology of immigrant multiculturalism and the inbuilt radicalizing nature of this ideology, and argues that the "theory of multicultural citizenship" is marred by a double standard which encourages minorities to affirm their collective cultural rights while Euro-Canadians are excluded from affirming theirs.

"Dr. Duchesne combines a scholarly method with an approachable style that makes Canada in Decay a significant manual for those resisting the deconstruction of Western societies through multiculturalism as a dogma and as a demographic assault." - Dr Kerry Bolton. Author of The Psychotic Left, and The Decline and Fall of Civilisations.

"Canada in Decay is a bold, compelling, and often devastating deconstruction of the Left-Liberal narrative which has dominated Canadian politics since the 1970s. It is bound to put on the defensive both the politically correct Left and the globalist Right not just in Canada but across the entire western world." - Grant Havers, author of Leo Strauss and Anglo-American Democracy: A Conservative Critique.