The King's Irish: The Royalist Anglo-Irish Foot of the English Civil War (Century of the Soldier #49) (Paperback) 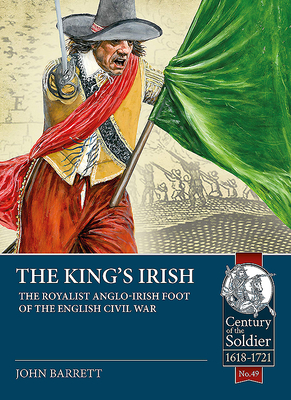 The English troops serving in Ireland were vital source of experienced and possibly war-winning manpower sought after by both King and Parliament in the Civil War. The "cessation" or truce which King Charles reached with the Irish Confederates in September 1643 enabled him to begin shipping over troops fro Ireland to reinforce the Royalist armies.

During the following year the "Irish", as they were frequently if inaccurately known by both sides were an important factor in the war. The Nantwich campaign (December 1643-January 1644), the consolidation of Royalist control in the Welsh Marches during the spring of 1644, the Marston Moor campaign, and the Battle of Montgomery (September 1644) all received major contributions from the troops from Ireland.

Other troops from Ireland, mainly from the province of Munster, provided important reinforcements for the Western and Oxford Royalist armies during the 1644 campaigns in western and southern England. The "Irish" were still a significant part of the Royalist army during the Naseby campaign of 1645, and elements remained in action until the end of the war.

The book will look at the Irish campaign and its influence on the experience and behaviour of the troops when they reached England. It will examine their equipment, logistical care, and experience following their return.

It will look at the performance of some of the troops, such as the "firelocks" who changed sides and became valuable additions to the Parliamentarian forces. Also examined is the controversial topic of "native Irish" troops who were involved, and a number of prominent indiduals who also srved in the war.

Full use is made of extensive contemporary primary sources and also later research.