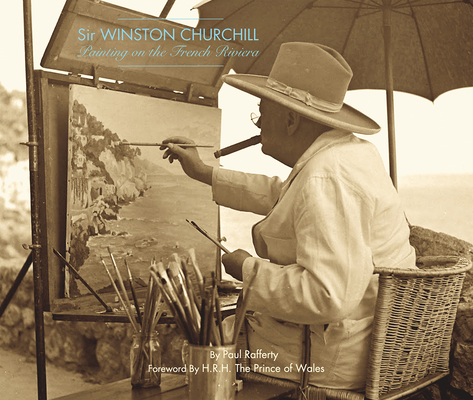 When Sir Winston Churchill discovered painting at the age of forty, he reveled in his newfound pastime. He went on to produce more than 550 paintings, over 130 of them of the French Riviera. His fellow artist and Riviera resident Paul Rafferty has tracked down many of the locations Churchill used in Provence, an area the great man so aptly called “paintatious.” Many of these locations are newly discovered, and Churchill’s “fearless impressions” stand alongside them to illustrate how he captured them on canvas.

Rafferty became familiar with Churchill’s paintings in 2008 in Provence and was soon fascinated by them. Winston Churchill: Painting on the French Riviera is Rafferty’s record and exploration of the people and places Churchill captured in his art.

Paul Rafferty is an artist whose work has been exhibited around the world. He is represented by the Portland Gallery in London, and he has a gallery in Saint-Paul-de-Vence on the French Riviera, where he lives with his wife and children.

"Dozens of exciting new discoveries about Churchill's paintings . . . . The discoveries include tracking down the locations of more than 40 pictures, many of which have been retitled, and casting further light on the great statesman."
— Sunday Telegraph (UK)

"Something of an odyssey, walking in a giant’s footsteps in order to discover a lesser-known side of arguably one of the 20th century's greatest statesmen."
— The Connexion

"A sumptuous work about the more than 150 canvases Churchill painted in the South of France from 1920 onwards, which represent a quarter of his total output. Churchill loved using bright colors and the sunlight there gave him endless opportunities for what he called 'paintatious' scenes, every one of which is reproduced in this truly ravishingly beautiful and appropriately large volume. . . . The result of Rafferty's meticulousness and passion is 200 pages of captivating paintings, gorgeous photographs of the south of France, fascinating history, and, for anyone who loves the region, powerful images that impart a sense of nostalgia that hits one like a punch to the solar plexus."
— Claremont Review of Books

"Rafferty has had an incredible voyage of discovery following Sir Winston's Great Easel across the most beautiful locations on the Riviera. This book will dazzle you like the Mediterranean."
— Randolph Churchill

"Rafferty has vastly extended our knowledge of Sir Winston Churchill's favourite pastime by visiting and describing his actual Riviera venues as they are today. His expertise as fellow painter adds a special note of authenticity to this excellent book."
— Richard M. Langworth, CBE Senior Fellow, Hillsdale College Churchill Project