French Vocabulary And Grammar: Learn The Basics Of The French Language And Discover How To Build Common Phrases With Principal Verbs And Basic Rules (Paperback) 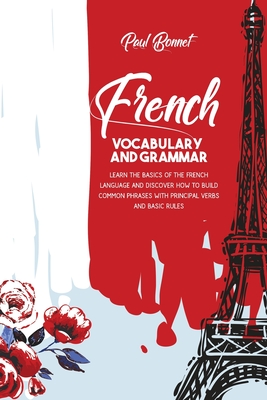 Do you want to learn and speak French quick and easy? This is the book for you

Your Customers Will Never Stop to Use this Awesome Book

The ability to speak French is essential while traveling in France. The French are notorious for their disdain of the use of English, the tongue of their long-time neighbor and rival, in their own country.

In addition to France, French is also spoken in 28 other countries, and most importantly it's simply fun to speak

If you've ever encountered French words and tried to speak them, the way you would as an English speaker, you'd probably encounter some frustration and difficulty. Fortunately, French is really not that difficult. This book will make your efforts even easier, even if you feel that you lack the so-called "language learning gene "

Vocabulary is one of the most challenging aspects of learning a new language simply because there is so much of it to memorize. Look at the room around you and count how many things you see. There are probably over one hundred objects--nouns--within your line of sight. Each of these objects has a name in English, and each also has a name in French. And that's just nouns. To speak in French, you will also need the vocabulary for other parts of speech: verbs, adverbs, adjectives, prepositions, conjunctions, interjections, etc. Each English word has a French counterpart.

- Genders, Plurals, And Their Articles

French is a Romance language, unlike English, which is a Germanic language. As a result, French grammar and English grammar have more differences than, for example, English grammar and Dutch grammar. No two languages have the same exact grammatical structure, of course, but French can be a little more challenging simply because it shares fewer roots with English. Nevertheless, there are plenty of techniques you can use to master French grammar.

The French language is full of many small changes that make big differences to the words they are put with. We will examine in depth these small differences between the different forms of the same word that you will begin to see as you enter the world of French speaking, reading and writing. There are prefixes and suffixes that are added or changed in order to change a word from present to past to future tense. There are prefixes that you add in order to put two vowels side-by-side without having it all jumbled up in your mouth as you try to speak the words.

There are small changes you can make to a sentence to take it from a friendly and casual way of speaking to a formal and respectful one. The way these small changes have big impacts on the words and sentences is what makes the French language so interesting to learn and to use. It can also be what makes it difficult, but as soon as you learn the rules-like with anything else, you will be well-equipped to take on anything French.

>Now what are you waiting?

★BUY NOW this Amazing Book for your Customers ★