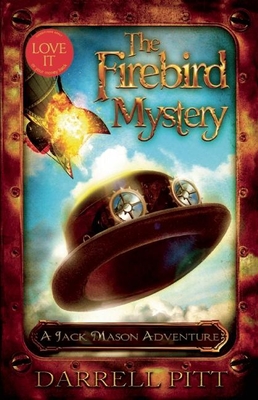 Jack Mason grew up as an acrobat in a circus. After the tragic death of his parents, he was sent to live within the gloomy Sunnyside Orphanage in London, a city of fog and snow, filled with airships, steamcars, and metrotowers stretching into space.

That's until he is taken under the wing of the brilliant and eccentric detective Ignatius Doyle. But when a girl named Scarlet Bell comes seeking Mr. Doyle's help, little does Jack know how dangerous life is about to become. Scarlet's father has been kidnapped, and the future of the world itself may be at stake. Is the evil hand of Professor M pulling the strings? Mr. Doyle and Jack know there is no time to lose.

With all its twists and turns and helter-skelter action, The Firebird Mystery is an addictive story and a spellbinding homage to the world of Victorian literature that will appeal to readers of all ages.

Darrell Pitt began his lifelong appreciation of Victorian literature when he read the Sherlock Holmes stories as a child, before moving on to H. G. Wells and Jules Verne. This early reading led to a love of comics, science fiction, and all things geeky.

Please note: the "Love It" publisher offer expired in December 2014.

Darrell Pitt: Darrell Pitt's lifelong appreciation of Victorian literature began when he read the Sherlock Holmes stories as a child, before expanding his reading to include H.G. Wells and Jules Verne. This led to a love of comics, science fiction and all things geeky. Darrell is now married with a daughter.