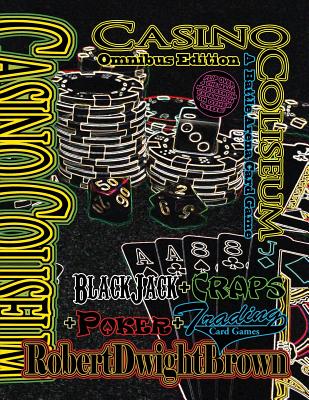 Casino Coliseum, a new and intense variation on Poker, takes elements from card games such as Blackjack, Poker, and collectible trading card games (TCGs), and combines them with elements of the casino game Craps, creating an exhilarating new game unique from Las Vegas to Monte Carlo.

In Casino Coliseum, you are one of two mighty Battlemagi, armed with a common deck of playing cards, battling to the death. Just as the gods gamble with the lives of men and the fates of kings and kingdoms, you wield the games of the gambling halls in epic, world-shattering magical combat.

Inspired by BLACKJACK: As a Battlemage, you attack by building rage to wield your mighty magical sword against your foe, attempting to be dealt by the Divine Dealer, Mistress Fate, the sacred number "21." But beware If you build too much rage, you will overswing your foe and "critical miss" the blow, leaving yourself open to counter-attack But if you build too little rage, your opponent can successfully defend against your attack.

Inspired by CRAPS: Since Creation itself, the gods have delighted in casting dice over the fates of kings and kingdoms. You have seized the power over your own fate, from Fate herself, by rolling the dice against your opposing Battlemage. The sacred number "7" is governed by the mischievous trickster god and will instantly dance between sacred and demonic after the very first roll of the dice. Your fate is in your hands

Inspired by POKER: An ancient proverb states-- Man must play the hand in which he is dealt by the gods. As a Battlemage, you have learned the dark arts of casting powerful spells with the hands you that are dealt by the gods, inflicting often massive magical damage in your battle within the Casino Coliseum

Includes both The Panteon and Mana Maelstrom expansions

Inspired by ROULETTE: The Fates spin the Mana Maelstrom (roulette wheel), and the "Oracle" (ball) reveals a "divination" (number), which either "blesses" with bountiful maelstrom or "curses" you with utter ruin.