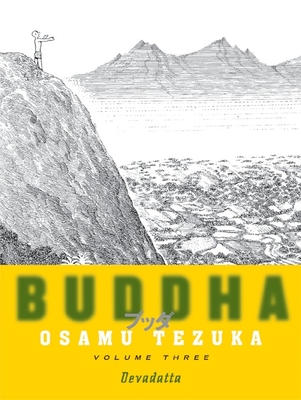 This is book number 3 in the Buddha series.

The Eisner and Harvey Winner

The third volume of this epic graphic novel send Siddhartha further into a world mired in pain and suffering. The journey to peace and enlightenment looms far but bright.

Prince Siddhartha quickly learns that the monk's path is covered in thorns and self-abuses much more profound than shaving your head. His new companions Dhepa and Assaji accompany him to plague-ridden town, ruled by the ravashing Visakha. On a different path filled with as many vararies is Devadatta, an orphan who learns only that bad almost always gets worse.

To strange cities, and dire prophecies...

Osamu Tezuka (1928-89) is the godfather of Japanese manga comics. He originally intended to become a doctor and earned his degree before turning to what was then a medium for children. His many early masterpieces include the series known in the U.S. as Astro Boy. With his sweeping vision, deftly interwined plots, feel for the workings of power, and indefatigable commitment to human dignity, Tezuka elevated manga to an art form. The later Tezuka, when he authored Buddha, often had in mind the mature readership that manga gained in the sixties and that had only grown ever since. The Kurosawa of Japanese pop culture, Osamu Tezuka is a twentieth century classic.


"Infused with humor and history, the epic of Siddhartha is perhaps Osamu Tezuka's crowning acheivement and illustrates why, without irony, Tezuka is referred to as 'The King of Japanese Comics'." - LA Weekly"Buddha is one of Tezuka's true masterpieces. We're lucky to have this excellent new edition in English." - Scott McCloud, author of Understanding Comics"In handsome volumes designed by Chip Kidd, the Vertical books present Tezuka at his best." - National Post

"Buddha is an engrossing tale. The armchair philosopher, the devout Buddhist, the casual manga fan - this book satisfies all with its tale of humanism through sequential art, and definitely earns its place on a bibliophile's bookshelf." -Anime Insider"This is one of the greatest acheivements of the comics medium, a masterpiece by one of the greats." -Artbomb.net"In Tezuka's world, the exquisite collapses into the goofy in a New York minute, the goofy into the melodramatic, the melodramatic into the brutal, and the brutal into the sincerely touching. The suprising result is a work wholly unique and downright fun." -Time Out NY"Tezuka's Buddha is a striking and memorable confluence of ancient wisdom and contemporary popular art." -Yoga Journal