The Cure: What if God isn't who you think He is and neither are you? (Paperback) 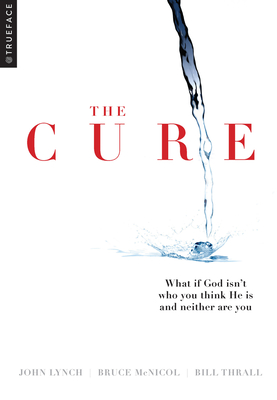 The Cure gives the diagnosis of this century’s religious obsession with sin-management. It has poisoned the Church, obscuring the Original Good News and sending millions away, wounded, angry and cynical, from nearly any organized expression of faith. This newly designed format of The Cure offers an authentic experience in Christ that frees some from a self-rewarded righteousness, and others from a beaten down striving for a righteousness they can never seem to attain. The Cure infuses a relational theology of grace and identity, which alone can heal, free and create sustainable, genuine, loving, life-giving communities.

For over 20 years the team at Trueface has been writing, speaking, consulting and dreaming about how to help leaders trust God and others with them. We are still doing that while we passionately grow the diversity of voices who are bringing this freedom to the world.

With strong contributions from nearly a dozen men and women across three generations, this effort brings daily encouragement and application from the growing unity in diversity that grace can foster. To see more about the team on this book go to www.trueface.org

Trueface is a non-profit that works very hard to sustain through excellent services and products. We aim for a strong 50/50 model that pairs with your investments in this work. We would deeply appreciate your support and will continue our transparent practices held to that excellence by our ECFA membership for non-profit financial governance.

God has used the teaching wisdom, global vision, and business skills of co-founder and President, Dr. Bruce McNicol, to help Trueface offer break-through experiences of grace for many thousands around the world. Leaders in all spheres of influence have found God's lasting resolution for their life issues and key relationships as they have journeyed with Bruce.

With degrees in finance law, theology, leadership and organizational development, Bruce’s gifting to write to diverse readers and leaders has proved true in the best-sellers he has co-authored: The Cure, The Ascent of a Leader, Bo’s Café, Behind The Mask, The Kingdom Life, and High Trust Cultures. Audiences in various countries continue discovering hope and freedom from Bruce's story-driven, biblically-anchored teaching.

Having lived in Portland, Los Angeles, San Francisco Bay Area, Chicago, and Phoenix, Bruce has gained a variety of interests through the years, including international cultural trends and needs, music, hiking, reading, comedy, and sports. His constant interest is his wife Janet, who is a home-maker, nurse, and mentor. Bruce and Janet have received extensive tutoring from their three wonderful children and spouses, Nicole, married to Kory, with grandchildren Willo and Elliott; Chad married to Erica; and Ryan.

As co-founder of Trueface in 1995, Bill Thrall’s wisdom has been penned throughout The Cure, The Ascent of a Leader, Bo’s Café, Behind The Mask, and High Trust Cultures.

Bill’s gifts and experience also shine as he helps leaders establish trust in all their key relationships and nurtures grace-based environments. CEO’s of international companies to heads of mission organizations and universities have repeatedly discovered a life-long gratitude for spending time with Bill.

Prior to joining Trueface, Bill founded and pastored the influential faith-community, Open Door Fellowship, for over 20 years. While there he developed an effective character development training program, which nurtured visionaries such as Kit Danley, founder of Neighborhood Ministries.

In his spare time, Bill can be found fishing, golfing, crafting furniture for his family in his woodshop, and cultivating fruits, herbs, and vegetables in his fertile backyard garden. Bill and his wife, Grace have three grown children, Wende married to Jim, Bill married to Charlotte, and Joy married to Joe, and nine grandchildren.

John Lynch taught himself Danish and German, and later obtained the degree of BA in these languages at the University of Newcastle. He has taught English in Danish and German schools and has also worked in Sweden and Iceland. After studying at the University of East Anglia, he was awarded the degree of MA in Scandinavian Studies. He holds a Postgraduate Diploma in Librarianship and his varied career included a spell as a college tutor librarian in Banbury. In addition to the present work, John has also translated works from Danish, including The Fantasists, a novel by Hans Egede Schack, published by Austin Macauley in 2013.