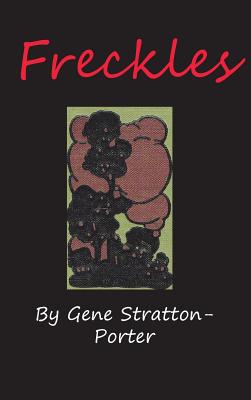 The hero is an adult orphan, just under twenty years of age, with bright red hair and a freckled complexion. His right hand is missing at the wrist, and has been since before he can remember. Raised since infancy in a Chicago orphanage, he speaks with a slight Irish accent, "scarcely definite enough to be called a brogue." Exhausted after days of walking, he applies for a job with the Grand Rapids lumber company, guarding timber in the Limberlost Swamp. The lumber company field manager, McLean, is impressed by the boy's polite assertiveness and hires him despite his youth and disability. He gives his name only as "Freckles", insisting that he has no name of his own. He claims the name given him in the orphanage (which we never learn) "is no more my name than it is yours". So that he has a name to put down on the books, McLean gives Freckles the name of his own father, James Ross McLean. Freckles' duty is to twice a day walk the perimeter of the lumber company's land, a seven-mile trek through lonely swampland, and to be on the watch for those who aim to steal the expensive timber. McLean's chief worry is Black Jack Carter, who has sworn to smuggle several priceless trees out of the swamp. Freckles' weapons are limited to a revolver and a stout stick, which he carries at all times and uses to test to wire that marks the company's boundaries. At night Freckles boards with Duncan, head teamster for the lumber company, and Duncan's wife, who becomes a mother figure to Freckles.