The Pros: The Forgotten Era Of Tennis (Paperback) 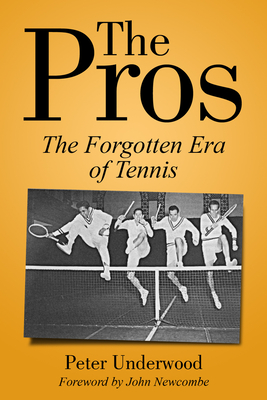 To most modern day tennis fans, it was impossible to believe that until the late 1960s pro tennis players—that is those who played openly for prize money—were banned from competing in the world's major tournaments. Before this time, the great contests such as Wimbledon were exclusive to so-called amateurs. Amateur tennis players were meant to compete only for glory. Though this division arose the "pro tour" in the 1930s, and it endured for forty years. In The Pros, The Forgotten Era of Tennis, author Peter Underwood explains why professional players were forced into what was often called the traveling circus where these sporting outcasts played each other during long and rather tatty tours all over the world. Focusing on the eight champions who dominated the pro era beginning in 1930 with the ultimately tragic figure of "Big" Bill Tilden, this book follows each pro champion through the post-1962 Grand Slam pro career of Rod Laver, who then helped usher in the modern-era of pro tennis with the start of the "Open" Era in 1968.

Peter Underwood is a writer, broadcaster, activist, and the winner of the Nobel Peace Prize in 2017. He has a long involvement with the Medical Association for Prevention of War, a group of health professionals who in 2009 founded the International Campaign Against Nuclear Weapons. He divides his time between peace work, medical education, growing fine wool, and writing. A passionate student of tennis since childhood, The Pros is his first nonfiction book.