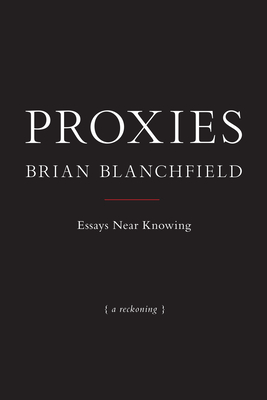 Brian Blanchfield is the author of two books of poetry, Not Even Then and A Several World, which received the 2014 James Laughlin Award and was a longlist finalist for the National Book Award. His book of essays, Proxies: Essays Near Knowing, was published in April 2016. Recent essays and poems have appeared in Harper's, BOMB, Guernica, The Nation, Chicago Review, The Brooklyn Rail, A Public Space, The Paris Review, and The Awl. He has taught as core faculty in the graduate writing programs of Otis College of Art and Design in Los Angeles and at the University of Montana, Missoula, where he was the 2008 Richard Hugo Visiting Poet. A 2016 Whiting Award winner, he lives with his partner John in Moscow, ID, where he is as an assistant professor of English at the University of Idaho.