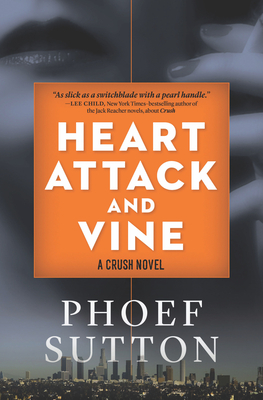 This is book number 2 in the Crush Mysteries series.

As slick as a switchblade with a pearl handle. -- Lee Child, New York Times best-selling author Los Angeles bodyguard/bouncer Caleb Rush (Crush) is back in this second Crush novel. When Rachel Fury, a con-artist friend who'd vanished for a couple of years after a big scam, reappears in Hollywood under a new name as a glitzy movie star, she hires Crush as a bodyguard, and he quickly gets drawn into a criminal mess that requires all his brawn, skill, and savvy to negotiate. It's rich with Hollywood lore, New Orleans charm, snappy dialogue, fast-paced action, and noir atmosphere.

Phoef Sutton is a New York Times-bestselling novelist, television writer, and playwright whose work has won two Emmys, a Peabody, a Writers Guild Award, a GLAAD Award, and a Television Academy Honors Award. The first novel in the Crush series, titled Crush, was a Kirkus Best Mystery of 2015 and a Los Angeles Times "Summer Reading Page-Turner." Sutton has been an executive producer of Cheers, a writer/producer for such shows as Boston Legal and NewsRadio, a writer for Terriers, and the creator of several TV shows, including the cult hit Thanks. He is also the co-author, with Janet Evanovich, of two New York Times. bestsellers. Curious Minds. and Wicked Charms. His other novels include the romantic thriller 15 Minutes to Live.. Sutton lives with his family in South Pasadena, California.