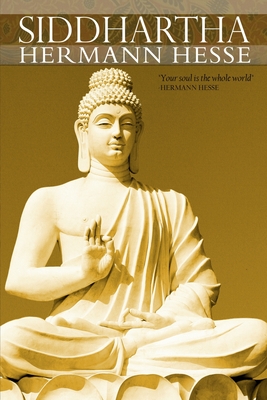 By Hermann Hesse
This book is no longer available.
We Can Order This For You

Siddhartha is a novel by Hermann Hesse that deals with the spiritual journey of an Indian man named Siddhartha during the time of the Buddha. The book, Hesse's ninth novel (1922), was written in German, in a simple, powerful, and lyrical style. It was published in the U.S. in 1951 and became influential during the 1960s. Hesse dedicated Siddhartha to Romain Rolland and Wilhelm Gundert. The story begins by painting a picture of Siddhartha as a perfect son: smart, athletic, obedient, and handsome. However, he eventually sees the limitations of the Brahmin life, and leaves his home to join the ascetics with his companion Govinda. The two set out in search of enlightenment. After seeing the limitation of asceticism, the two journey to meet the Buddha. Govinda is immediately impressed and takes refuge in the Buddha. Siddhartha respects the Buddha's enlightenment, but realizes that no teaching, not even the Buddha's, can capture enlightenment. The second half of the book starts with Siddhartha impressing a beautiful, wealthy courtesan. She sets him up with a job so that he can afford the beautiful things that will impress her. Initially seeing this as a game for children, he eventually finds himself caught up in the trading, drinking, and gambling of a merchant life. He leaves again for the forest. After settling into a nice life sharing ferryman duties with a wise friend, Siddhartha finds out he fathered a son. He attempts to raise the boy in this simple life, but the boy gets frustrated and returns to the city. Siddhartha finally feels the sorrow of love, which leads to a deep compassion for all of his fellow humans.