Put A Stamp On It!: Seventy-Seven Sparkling Stories Showcasing How Stamps Have Intercepted Historical Events (Paperback) 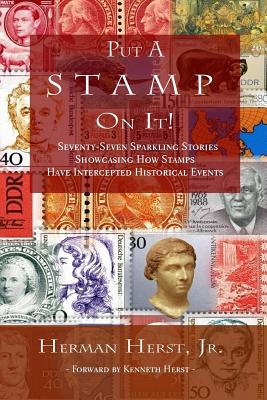 WHAT do the Charley Ross kidnapping, the Dunning sale, Britain's female mason, Sherlock Holmes and the Littlewood's pool, the founding of the YMCA, George Sloane, and the Madeline Smith Postcard all have in common? Stamps were an important part of these historical events. Even though we don't often think of stamps in the context of making history, those small, decorative aspects of the mail system are far more than just there to decorate the envelope. At the heart of every letter, every postal moment for hundreds of years, stamps can be found, changing history as we know it. In this book, author and stamp historian Herman Herst, Jr. shares with us about the rich history of several historical events and the way that stamps influenced them. Told with good humor, perspective, and solid documentation, Herman Herst, Jr. offers us insight into the smallest details of the mail industry - stamps - and shows us that history is often staring back at us every time we mail or open a letter. Come along to share in seventy-seven stories where history proves that stamps are the stars, sealing history in ways we would least expect it.

known author and philatelist, specializing in writing for the philatelist community. His work was particularly noted for focusing on the history of stamp collecting and was of interest to collectors, regardless of whether they were new to the hobby or involved with it for a long period of time. He received the Luff Award in 1961 and was elected to the American Philatelic Society Hall of Fame in 2000. His books included Fancy Cancellations on Nineteenth Century United States Postage Stamps, Forensic Philately, Nassau Street, and Fun and Profit in Stamp Collecting. This book has been brought into print by the author's son, Kenneth Herst, in memory of his father's work and legacy.