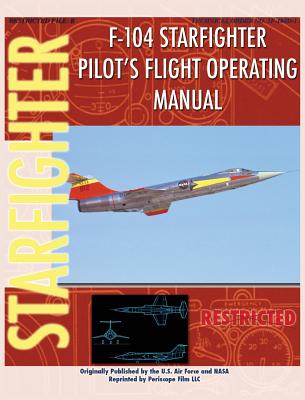 Created by famed Lockheed designer Kelly Johnson, the F-104 Starfighter was designed to compete with Soviet Mig-15s. Equipped with a huge and powerful J79 engine, the aircraft could reach speeds well in excess of Mach 2.0, while its thin, trapezoidal wing provided extremely low drag with terrific acceleration and rate of climb. Unforgiving and sensitive to control inputs, the F-104 killed many pilots and developed a reputation as a "widow-maker". Despite its shortcomings, the Starfighter enjoyed a long career. It flew in the air support role during "Rolling Thunder" in the Vietnam War. It also saw extensive service in foreign air forces and NATO. NASA continued to use the F-104 as a support aircraft until 1995. This pilot's flight operating handbook was originally produced by the USAF. It has been slightly reformatted but is reproduced here in its entirety. It provides a fascinating view inside the cockpit of one of history's great planes.