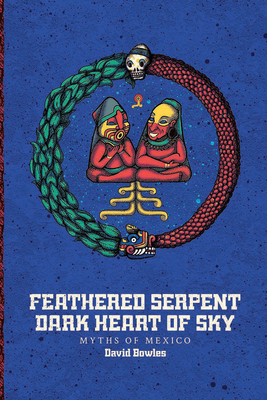 The stories in Feathered Serpent, Dark Heart of Sky trace the history of the world from its beginnings in the dreams of the dual god, Ometeotl, to the arrival of the Spanish conquistadors in Mexico and the fall of the great city Tenochtitlan. In this book's beautiful language, we learn the history of the Creator Twins―Feathered Serpent and Dark Heart of Sky―and how they built the world on a leviathan's back; of the shape-shifting nahualli; and the aluxes, elfish beings known to help out the occasional wanderer. And finally, we read Aztec tales about the arrival of the blonde strangers from across the sea, the strangers who seek to upend the rule of Moctezuma and destroy the very stories we are reading.

David Bowles stitches together the fragmented folklore and mythology of pre-Colombian Mexico into an exciting, unified narrative in the tradition of William Buck's Ramayana, Robert Fagles's Iliad, and Neil Gaiman's Norse Myths. Readers of Norse and Greek mythologies will delight in this rich retelling of stories less explored. These tales hold a touch of magical realism while holding true to their meanings and their Indigenous roots.

Legends and myths captured David Bowles's imagination as a young Latino reader; he was fascinated with epics like the Iliad and the Odyssey. Despite growing up on the United States/Mexico border, he had never read a single Aztec or Mayan myth until he was in college. This experience inspired him to reconnect with that forgotten past. He is currently working on adapting stories from Feathered Serpent, Dark Heart of Sky for a younger audience with the middle grade graphic novel series Tales of the Feathered Serpent. The first installment, Rise of the Halfling King tells the story of the dwarf king of Uxmal. Several of his previous books have also incorporated themes from Mexican myths that are told throughout generations such as the middle grade graphic novel, The Chupacabras of the Rio Grande (The Unicorn Rescue Series) which includes the infamous chupacabra, a creature from Latin American folklore that sucks the blood of livestock, goats, and even people. His other works include They Call Me Guero: A Border Kid's Poems which won the Pura Belpr Honor award, the TIL Best Middle Grade Book award, the Tom's Rivera award, and numerous other honors.