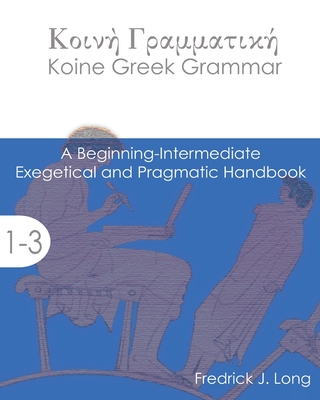 Koine Greek Grammar and its accompanying Workbook and Answer Key & Guide have been in the making for decades. It was first a small manual Kairos Greek Grammar; then it grew into a fully integrated and hyperlinked CD that has been published by Logos Bible Software (2005). Now, this current handbook--KOINE GREEK GRAMMAR: A BEGINNING-INTERMEDIATE EXEGETICAL AND PRAGMATIC HANDBOOK--has been thoroughly expanded to include my more explicit description of marked, emphatic, prominent, and pragmatic features of Greek, ideas that were nascent in KAIROS, but now grounded in a communication theory informed by Relevance Theory (Dan Sperber and Deirdre Wilson), Prominence Theory with reference to translation (Kathleen Callow), and Discourse Grammar and Pragmatics (Stephen Levinsohn, Stanley Porter, and Steven Runge). Exegetically significant aspects of Greek syntax and the use of the Greek language (i.e., pragmatics) occur strategically throughout KOINE GREEK GRAMMAR and include the following: - conjunctions and their constraints- point/counterpoint sets- polysyndeton, asyndeton, correlative emphasis, and lists- fronted modifiers for emphasis (genitive, demonstrative, quantitative)- vocatives as thematic address- appositional statements- the historic present and the verb tense options in narrative- metacomments as orienting statements- interjections as attention getting devices- quantitative, qualitative, interrogative, negative, and comparative types of emphasis- special uses of the noun cases- participle uses, including periphrastic and genitive absolutes- special uses of the Moods- left-(dis)locations- discourse pragmatic uses of the article- conditional and exception clauses.Some of these discussions will have extended Intermediate-level treatments that are placed within greyed boxes. Other significant enhancements are the inclusion of CHECK POINTS that give students a chance to practice what is being learned in each chapter along with (SUGGESTED) ANSWERS that immediately follow. Scattered throughout KOINE GREEK GRAMMAR are images of ancient realia, i.e., remnants of Mediterranean material culture including biblical and non-biblical papyri fragments, vase paintings, coins, bas-reliefs, imperial artifacts, inscriptions, funerary stele, statues, gems, temples, maps, and reconstructed scenes of life in the polis. The language and syntax of the Greek NT is contextually located in these worlds. Still present (but improved) are the CASE IN POINTS at the end of each chapter that briefly describe how particular points of Greek grammar just presented helps us when interpreting the Greek NT. In other words, the CASE IN POINT illustrates how Greek grammar is valuable as a tool for the study of the NT. In addition to having a full APPENDIX, VOCABULARY OF WORDS OCCURRING 20 TIMES OR MORE, and INDICES, KOINE GREEK GRAMMAR has a separate extensive WORKBOOK AND ANSWER KEY & GUIDE. that has been carefully crafted with many exercises drawn directly from biblical expressions and actual verses.