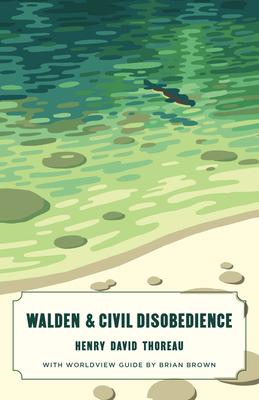 "I have repeatedly known of young men of sensibility converted in a moment to the belief that Thoreau was the man they were in search of, the man of men, who could tell them all they should do." -Ralph Waldo Emerson

Look Inside the Book

" Walden is a book that defies traditional classification. Thoreau moves nimbly between social commentary, political critique and vivid descriptions of the parenting behavior of wood-cocks. His assessment of his modern society is at once insightful and boorish. He identifies with piercing accuracy the enslavement of his fellow citizens to the complexities of modern life while neglecting the many gifts that are given to us in and through the City of Man." -From Brian Brown's Introduction

Although Henry David Thoreau spent only two years living by Walden Pond, his lengthy account of the experience is venerated by outdoorsmen, nature lovers, and all those disgusted with the burdens of a myopic nation. His writing is painstaking in its detail and rapturous in its descriptions of the simple beauty surrounding his unadorned cabin in the Massachusetts countryside. Thoreau's self-imposed exile from society challenged others to provide what he believed he offered: a candid and sincere account of one's own life, unsullied by the pursuit of wealth and influence. Walden is paired with Thoreau's essay On Civil Disobedience, in which Thoreau argues that it is the citizen's duty to resist a government's injustice.

This Canon Classic has achieved mystical status: The rest of Thoreau's life, acquaintances, and accomplishments all fade into insignificance beside his short experiment at Walden Pond. The Canon Classics series presents the most definitive works of Western literature in a colorful, well-crafted, and affordable way. Unlike many other thrift editions, our classics are printed on thicker text stock and feature individualized designs that prioritize readability by means of proper margins, leading, characters per line, font, trim size, etc. Each book's materials and layout combine to make the classics a simple and striking addition to classrooms and homes, ideal for introducing the best of literary culture and human experience to the next generation.

This Worldview Edition features an introduction divided into sections on The World Around, About the Author, What Other Notables Said, Setting, Characters, & Plot Summary, Worldview Analysis, and 21 Discussion Questions & Answers.