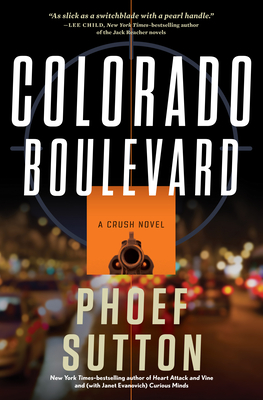 This is book number 3 in the Crush Mysteries series.

The first in an action-packed, humor-filled mystery/thriller series perfect for fans of Lee Child's Jack Reacher

A smart, noirish mystery loaded with clever dialogue and vivid characters. The Crush series is as good as it gets.
-- Kirkus (starred review)

When Zerbe, the honorary brother (and roommate) of LA's toughest bodyguard/bouncer, Crush, is kidnapped, Crush springs into action to save him. Unraveling the mystery takes him to Zerbe's estranged billionaire father, who's obsessed with building California's long-promised bullet train, as well as to Pasadena's famed Rose Parade along Colorado Boulevard. This third installment in the Crush series (both of which were Kirkus Best Mysteries of the Year) is full of action, humor, and mystery.

Phoef Sutton is a New York Times-bestselling novelist, television writer, and playwright whose work has won two Emmys, a Peabody, a Writers Guild Award, a GLAAD Award, and a Television Academy Honors Award. All three novels in the Crush series, Crush, Heart Attack and Vine, and Colorado Boulevard were Kirkus Best Mysteries of the Year. Crush was also a Los Angeles Times "Summer Reading Page-Turner" and Heart Attack and Vine was a Ten Best Mystery of 2016 for the Milwaukee Journal-Sentinel. Sutton has been an executive producer of Cheers, a writer/producer for such shows as Boston Legal and NewsRadio, a writer for Terriers, the writer of six TV movies for Hallmark Movies and Mystery Channel including the Darrow & Darrow series, and the creator of several TV shows including the cult hit Thanks. He is also the co-author, with Janet Evanovich, of two New York Times bestsellers, Curious Minds and Wicked Charms. His other novels include the supernatural ghost story From Away and the romantic thriller 15 Minutes to Live. Sutton lives with his wife and two daughters in South Pasadena, California, and Vinalhaven, Maine. Learn more at phoefsutton.com