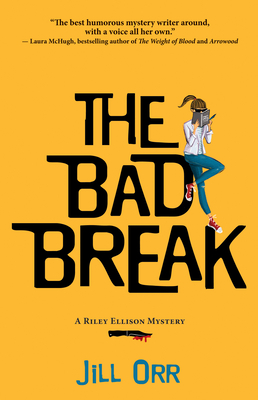 This is book number 2 in the Riley Ellison Mysteries series.

"The small-town nature of this mystery, with the requisite fish-bowl local politics, relationships, and grudges, makes it perfect for cozy lovers who want something more modern. Readers will enjoy Riley's humor and determination even when things turn sad."
-- Booklist

Riley Ellison has taken a great leap of faith by giving up her comfortable job at the Tuttle Corner Library for the exciting world of print journalism. Except that so far it hasn't been very exciting. All that changes when Riley's former co-worker Tabitha finds her soon-to-be father-in-law dead on the floor of his office, and Riley is asked to write his obituary. And when they discover Tabitha's fianc 's knife sticking out of his father's chest, Riley finds herself with a murder investigation to cover as well.
With Holman out on leave and mounting pressure from her boss, the mayor, and a bridezilla facing the possibility of a conjugal-visit honeymoon, Riley is desperate to prove she can handle the increasing demands of her new job. Despite warnings from her new boyfriend Jay, Riley blurs the line between reporter and investigator. Will Riley's rookie mistakes lead to more than just her byline ending up on the obituary page?

Jill Orr is the author of the Riley Ellison mystery series, which has been called "delightfully comic" and "highly amusing" by Publishers Weekly. Books in the series have garnered praise from industry professionals and readers alike and have earned a Silver Falchion nomination, a starred review and Best Book of the Week from Library Journal, and a Midwest Connections pick.Originally from Chicago, Jill moved to Columbia, Missouri, to attend the University of Missouri, where she received her bachelor's degree in Journalism and her master's degree in Social Work. However, these days the only social work she does is at cocktail parties, and she sometimes wishes her degrees were in What's for Dinner and Decoding the Teenage Eye Roll.Jill lives in Missouri with her husband and two (usually delightful) teenage children. The fourth installment in the Riley Ellison series, The Full Scoop, is new for 2020. And Jill's new illustrated nonfiction humor book, How Not to Be Old (Even if You Are), arrives in November. Learn more at www.jillorrauthor.com.