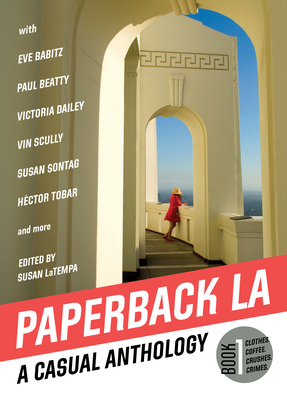 Paperback LA is a surprising and witty collection of some of the best writing ever about Los Angeles. More than a dozen major selections include new work and fresh discoveries: a radio broadcast, a ballad, a magazine article, excerpts from prizewinning novels and memoirs. These pieces are punctuated by perceptive photo essays, a quotable lineup of one-liners, and other quick hits. In the company of a virtuosic band of storytellers, Paperback LA roams across the decades, from just after the Mission era to just after Hollywood's golden age, from the post-hardcore punk scene to a reimagined today. With Susan Sontag, we visit Thomas Mann. With Paul Beatty, we turn a Metro ride into a PCH party. With H ctor Tobar, we search for people who lived somewhere around here. With Victoria Dailey, we look in on the boys in the backroom. Photographers share vivid moments of street sights, skaters at play, and activists on the march. Paperback LA's contributors have attitude, and they have information. Each inspired work illuminates some aspect of the city's rich, spread-out reality. Some shine a quick klieg light on a moment or person, others gradually reveal a dawning sense of place--in settings that range from a 1920s rural dance pavilion to 1960s Dodger Stadium, with subject matter that sprawls from bookselling to bodysurfing. Contributions from
Eve Babitz - Paul Beatty - Dan Bern - Arna Bontemps - Carlos Bulosan - Cecil Castelucci - Victoria Dailey - William Heath Davis - Robert Landau - Justin Andrew Marks - Steve Martin - Hugo Reid - Vin Scully - Susan Sontag - Clancy Sigel - Hector Tobar - Victor and Mary Lau Valle - Elysa Voshell/Venice Arts.