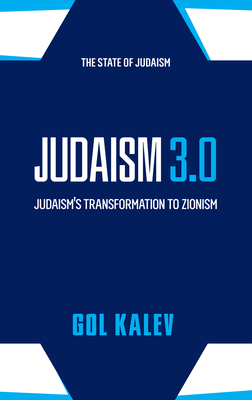 In this landmark book, Gol Kalev demonstrates how Zionism has turned into the organizing principle of Judaism. It has become the primary conduit through which both Jews and non-Jews relate to Judaism - in both the positive and negative.

Through an in-depth analysis of long-term shifts in Israel and in North American Jewry, as well as assessment of global trends that impact Judaism, Kalev shows that the anchor of the Jewish nation-religion has shifted from its religious element (Judaism 2.0) to its national element - Zionism (Judaism 3.0). This is occurring without any compromise to the religious aspects of Judaism. Whether in support or criticism, Zionism has become the one aspect of Judaism that evokes emotions, anger, passion and engagement.

Tying Theodor Herzl's original vision of Zionism to today's realities, Kalev shows that Judaism 3.0 is not only the most accurate reflection of the contemporary state of Judaism, but also the optimal architecture to address key issues of our times, such as intermarriage, Diaspora-Israel relationship, Tikun Olam and peace.

Kalev then shows how Judaism 3.0 is also the relevant framework to counter emerging threats to Judaism. First and foremost, the existential threat of Israel-bashing, which has replaced anti-Semitism as the primary currency of age-old opposition to Judaism.