The Life of Christ (Hardcover) 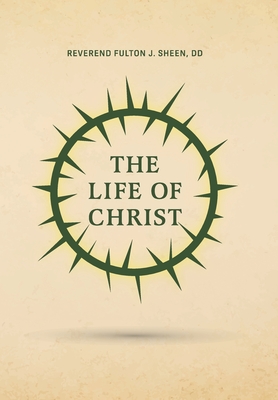 Fulton J. Sheen-bishop, scholar, professor, radio and television personality, and writer-spent his life sharing the Word of God with millions of Christians across the world. One of his best-known works is The Life of Christ, written in 1954. This book explores the foretelling of Christ's birth, his life, temptations, death, and resurrection. But while Sheen himself was a scholar and academic, his recounting is both readable and accessible to the layperson.

Fulton J. Sheen was born in El Paso, Illinois, in 1895. Ordained in 1919, he went on to study at The Catholic University of America in Washington, DC and the Pontificium Collegium Internationale Angelicum in Rome, where he received his Sacred Theology Doctorate.

In 1925, he began teaching philosophy and theology at Catholic University. His speaking talents were noted, and he was chosen to preach at the annual University Mass honoring St. Thomas Aquinas in 1927.

In 1930, then-Monsignor Sheen was added as a weekly speaker on the NBC radio broadcast The Catholic Hour on Sunday nights. He continued the broadcast for the next 20 years, and the show eventually reached a weekly audience of four million listeners. He appealed to the audience through his extensive knowledge of Catholicism and how the teaching of Christ applied to the moral and societal questions of modern life.

By 1950, Sheen had resigned his teaching position at Catholic University of America and became director of the Society for the Propagation of Faith, where he raised millions of dollars to support Catholic missionary work.

The following year, he was consecrated a bishop and began the well-known television series, Life is Worth Living. The program ran for the next five years and reached an estimated 30 million weekly viewers. Sheen won an Emmy for Most Outstanding Television Personality in 1952. In response, he said, "I feel it is time I pay tribute to my four writers-Matthew, Mark, Luke and John." He was also featured on the cover of Time magazine that year.

Although he was now one of the most recognized Catholics in the country, Sheen still made time to write. He wrote 73 books during his life, including The Life of Christ in 1954.

Life of Christ is considered a classic work of Christian faith. It is unique in its readability, which is perhaps to unsurprising from a theologian with decades of experience bringing religion to the masses on radio and television.

Broken into five parts, the book explores the early life of Christ, his temptations, the beatitudes, his public life and Passion, and his death and resurrection. Sheen explains the meaning of Christ's words, as well as the significance of the trials and temptations he overcame. Through careful scholarship, he connects the events of Christ's life, showing how even the humble location of his birth on Earth shared an important lesson: "Divinity is always where we least expect to find it."

In his explanation of the beatitudes-the eight blessings given by Jesus in the Sermon on the Mount-Sheen shares their value to the modern world. He dismisses the words of Marx, Lenin, Nietschze and Freud. And he reminds us that the words of Christ are not "from another time." Christ is timeless and His Word is eternal.

Shortly before his death in 1979, Archbishop Sheen encountered Pope John Paul II in St. Patrick's Cathedral in New York. The Pope told Sheen that he had "...written and spoken well of the Lord Jesus. You are a loyal son of the Church " Two months later, Archbishop Sheen passed away in his private chapel. He is a candidate for beatification, which may pave the way for future canonization.