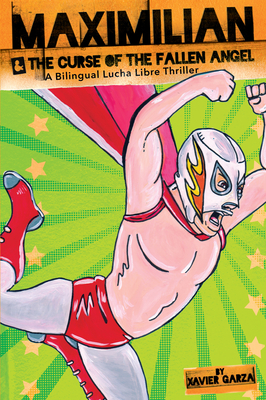 It's the end of an era Max's uncle --legendary luchador, the Guardian Angel-- is getting married and walking away from wrestling Max was set on taking over the wrestling role, but not so soon. He's just fourteen To make it worse, his uncle chose a wild new wrestler for his last match, the Fallen Angel. If the villain wins, will the legend of the Guardian Angel die before Max is ready to put on the mask?

Maximilian and the Curse of the Fallen Angel is the fourth in the Max's Lucha Libre Adventures series. Catch up on the adventures:

1--Maximilian and the Mystery of the Guardian Angel

2--Maximilian and the Bingo Rematch

3--Maximilian and the Lucha Libre Club Born and raised in the Rio Grande Valley, author and luche libre aficionado Xavier Garza is a prolific author, artist, and storyteller whose work focuses primarily on his experiences growing up in the small border town of Rio Grande City. Garza has exhibited his art and performed his stories in venues throughout Texas, Arizona and the state of Washington. Garza lives in San Antonio, Texas with his wife Irma and their young son Vincent.

Garza is author and illustrator of several lucha libre picture books for children. His lucha libre middle grade series began in 2005 with Lucha Libre: The Man in the Silver Mask and quickly became a hit among children and lucha libre fans. He has won a 2012 Pura Belpr an Am ricas Award Honor Book, a Texas Institute of Letters H-E-B Award for Best Children's Book, and been named an ALA Notable Children's Book, among other recognitions.