The Science of the Kabbalah (Paperback) 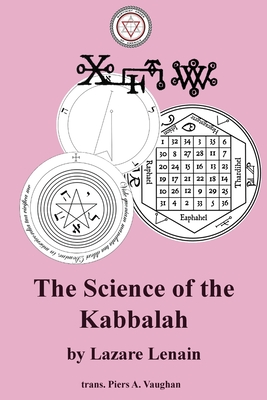 This is the first translation into English of Lazare Lenain's seminal work on the Shemhamephorash. 'The Science of the Kabbalah, or the Art of Knowing the Good Geniuses' was originally published in 1823. It was picked up by Papus when he was Grand Master of the Ordre Kabbalistique de la Rose-Croix and republished in 1909. Indeed, in his Preface he says: "No publication could benefit the progress of Kabbalistic studies more than the reissue of Lenain's very rare tract." Since then it has inspired such diverse esoteric characters as Samuel McGregor Mathers of the Hermetic Order of the Golden Dawn and Robert Ambelain of the Ordre Martiniste.

Lenain's stated purpose in writing the book was to: "make the public aware of what Magic is, so that each may obtain a correct notion of it, for ignorance demonizes everything it doesn't understand." Indeed, these are words which are particularly relevant today, in an age where scholarship, intellect, science and principle are being sacrificed upon the altar of self-interest, division and destruction.

He begins by discussing the power of numbers and an analysis of the Name of God, incorporating the sacred delta and, interestingly, using exactly the same phrase used by Lois-Clade de Saint-Martin: "God created all things by weight, number and measure." Indeed, much of his early chapters suggest a familiarity with his teachings, and this may be another reason Papus was a devotee of Lenain. He explains each of the twenty-two Hebrew letters in detail, as an introduction to their use to form the Shemhamephorash, or 72-lettered Name of God (which is actually 72 syllables, each composed of three letters taken from verses in the Book of Exodus. However, each set of three letters, with a suffix added to vivify it, creates 72 angels or geniuses associated with the circle of eternity, each ruling over 5 degrees of the circle.

Lenain provides a simple method to identify the three Geniuses which rule over the various aspects of one's life, as well as a detailed description of the Sacred Calendar. The three Geniuses which impact an individual's life are the Elemental, the Astrological and the Divine. This knowledge can be used in a number of ways, from designing talismans for protection and good fortune, to knowing the best times to undertake travel, business venture and to avoid pitfalls.

An extensive list of the attributes, characteristics, powers and associations of the 72 Geniuses or Angels makes up the bulk of the book, which provide the building block for all the operations and talismans which can be derived from each of the Geniuses. The Operator can elect to work with their personal Geniuses, or with one which has influence over a specific goal. He provides Tables which indicate the days and hours to perform the appropriate operations, together with the incense, animals, plants and minerals associated with the planetary forces. In this he draws extensively from older sources, in particular Agrippa's 'Occult Philosophy', Kircher's 'OEdipus Egyptiacus' and Dupuis' 'Origin of Cults'.

Although he promises to provide all the information necessary to create talismans based on the 72 Geniuses, this part was to be provided in a second edition, which never materialized. To rectify this omission, the translator has provided a number of Appendices listing seals and sigils which can be used, ranging from the (in)famous list of Sigils from the Arsenal Library manuscript 2495, and Seals created by using the Golden Dawn formula of the Rosicrucian rose. Finally, he provides a new interpretation of the 72 Angelic Seals devised by Eliphas L vi in his private notes of 1860 to one of his students, Baron Spedalieri, entitled 'Clefs Majeures et Clavicules de Salomon.'