Blood and Oranges: The Story of Los Angeles: A Novel (Paperback) 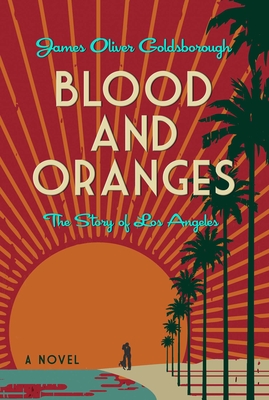 An action-packed historical novel whose charismatic characters take the reader from the roaring twenties to the fiery nineties in America's favorite left coast city. Los Angeles has never been better portrayed than by novelist James Oliver Goldsborough in Blood and Oranges.

Blood and Oranges: The Story of Los Angeles tells the story of how Los Angeles got that way— you know, THAT way, with Hollywood, mega-churches, impossible traffic, oil wells on the beaches, murders in the foothills, and riots in the suburbs. You have to go back a ways to understand, back to when the water came. Twin brothers Willie and Eddie Mull, a preacher and a high roller, arrive with the water and set out to make their marks. They rise with the city and reach the top.

The brothers have much to answer for, especially to their children. Maggie and Lizzie, Eddie’s daughters, don’t like Eddie’s mob ties, oil wells, or his gambling ship in Santa Monica Bay. Cal Mull, Willie’s son, watches his father rise to become the nation’s top evangelistic preacher, but like his idol, St. Augustine, Willie is weak in the flesh. Maggie, an aviator, wants women to fly in the war, but must get past Howard Hughes and find help in Washington. Lizzie works for the LA Times, wants women to be able to write for more than just the society pages in the paper, and does her best to get crime out of the D.A.’s department.

(And what happened to the trolleys that once covered 1,100 miles of city streets, half the distance to Chicago?)

The second generation of the family reacts to the first, but then must face the revolt of its own children.

In Blood and Oranges, we follow and fall in love with the City of Angels as it transforms itself over three generations, rolling with the waves that lap its Pacific shores, a place of plazas and orange groves becoming something unrecognizable to those who knew it even a half century earlier. It is the story of a family with its fingers in the seminal events of a city’s history—the rise and fall of institutions, neighborhoods, citizens, of the very land itself, constantly threatened by the people who call themselves its stewards.

James O. Goldsborough, raised in Los Angeles, is an award-winning writer with a 40-year career in journalism. Goldsborough spent 15 years in Europe as a foreign correspondent for the New York Herald Tribune, International Herald Tribune, Newsweek Magazine and the Toronto Star. He has written numerous articles for the New York Times Magazine, Foreign Affairs and Foreign Policy. His first book, “Rebel Europe,” published by Macmillan, was hailed by the Los Angeles Times reviewer, “the most important book I have read in years.” He next published “The Misfortunes of Wealth,” a family memoir dealing with the disadvantages of inherited money. His two earlier well-received historical novels are "The Paris Herald" (2014) and "Waiting for Uncle John" (2018), both published by Prospecta Press.

Author James Oliver Goldsborough has given us a fast-paced, engaging journey through the many twists and turns of Los Angeles as it exploded throughout the 20th century. Having spent his childhood there and attending UCLA, Goldsborough knows firsthand the metropolis and its many distinct neighborhoods.
“Blood and Oranges: The Story of Los Angeles,” is “sweet and sour, just like L.A.,” and is also a cautionary tale. In this historical fiction, the message is clear: Nature’s Paradise can be upended by careless human greed, by short-sighted investors, and by inept public institutions. Ultimately an optimist, Goldsborough has faith that civic-oriented leaders can correct wrong turns and create sustainable cities.
Through his fictional Mull family, Goldsborough traces the growth of Los Angeles from the arrival of water through aqueducts and the drilling of oil wells, the replacement of efficient trolleys with automobile culture, the investments in Hollywood and in aerospace, growth of Pentecostal revivalism and Evangelical radio, the ups and downs of the media industry, and eventually the emergence of a spirit of conservation and good governance.
Goldsborough harbors a certain nostalgia for mid-century Los Angeles. He writes: “The fifties were the golden age of Los Angeles, when a perfect balance was achieved between man, his resources and his ambitions: Human life was good. Governments were progressive, but not too… Dwight Eisenhower, a moderate Republican, was elected in two landslides, winning California and Los Angeles both times… It was a period of stability and equilibrium.”
But this stability and equilibrium were upset by excessively rapid growth, by a rapacious capitalist culture, and by demographic shifts that introduced racial tensions. The quality of public life was degraded by owners of newspapers more interested in excessive profits than in quality journalism, by public prosecutors in the pockets of criminals, and sometimes simply by bad, unscrupulous people with power over both public and private resources.
In Goldsborough’s world, the battle is never over, as passions pass from generation to generation. Betrayals and deceit can lead to murder (more than once in “Blood and Oranges”). Frustrated, distracted parents abandon unruly children they can’t handle. Children can inherit the best of their forebears – or the worst. Who can understand children? “It’s in their nature,” philosophizes one of the book’s wiser characters.
As one character wryly sums up the family intrigues: “Generations of love-hate, rejection, jealousy, insecurity, all the things psychiatrists make their living on.” In Goldsborough’s skillful hands, these recognizable passions make for great reading.
Readers, men and women, will appreciate Goldsborough’s ability to create recognizable, sympathetic female protagonists. At the center of the Mull family saga are two very distinct but equally talented and attractive sisters, one an early aviator and companion of the mysterious corporate captain Howard Hughes, the other a pioneering journalist and writer (modeled in part after the author?).
Through his female characters, Goldsborough traces the rise of women’s rights. In one of the book’s most dramatic chapters, a female religious leader is raped by her crazed, estranged husband. The old-time judge rules that a husband cannot, by definition, rape his wife. A similar real-world case led to the criminalization of spousal abuse in California and elsewhere. Other women in “Blood and Oranges” struggle to balance professional ambitions and family responsibilities.
A youthful character asks, “Why did Dad spend so much time pounding on the noisy black machine producing reams of paper that often ended up the wastebasket?” If this is Goldsborough pondering his own writing experience, we can be glad that, despite disappointments, he kept pounding away, to gift us this wonderful retelling of Southern Californian history, wrapped in tales of human love, death, defeats and victory. Histories in which we can see ourselves.