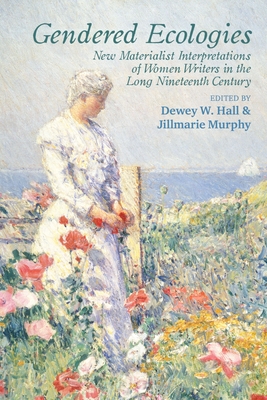 Gendered Ecologies: New Materialist Interpretations of Women Writers in the Long Nineteenth Century considers the value of interrelationships that exist among human, nonhuman species, and inanimate objects as part of the environment, and features observations by women writers as recorded in
nature diaries, poetry, bildungsroman, sensational fiction, philosophical fiction, and folklore. In addition, the edition aims to present a case for transnational women writers who have been involved in participating in the discourse of natural philosophy from the late eighteenth through the early
twentieth centuries. The collection engages with current paradigms of thought influencing the field of ecocriticism and, more specifically, ecofeminism. Various theories are featured, informing interpretation of literary and non-literary material, which include Anthropocene feminism, feminist
geography, neo-materialism, object-oriented ontology, panarchy, and trans-corporeality. In particular, neo-materialism and trans-corporeality are guiding principles of the collection, providing theoretical coherence. Neo-materialism becomes a means by which to examine literary and non-literary
content by women writers with attention to the materiality of objects as the aim of inquiry. Regarding trans-corporeality, contributors provide evidence of the interrelations between the body-as-matter and animate beings along with inanimate entities. Together, neo-materialism and trans-corporeality
drive the edition, as contributors contemplate the significance of interactions among human, nonhuman, organic, and inanimate objects.

Dewey W. Hall is Professor of English at California State Polytechnic University in Pomona. He is the author of Romantic Naturalists, Early Environmentalists: An Ecocritical Study, 1789-1912 (Routledge, 2014), featuring a discussion about literary origins behind the National Parks in America andNational Trust in England. The work for the study was supported through a short-term fellowship at The Huntington Library. His second book Romantic Ecocriticism: Origins and Legacies (Lexington, 2016) examines science-based discourse in nineteenth-century literature and implications for contemporaryculture. His third book Victorian Ecocriticism: The Politics of Place and Early Environmental Justice (Lexington, 2017) is an interdisciplinary edition, delving into the significance of place as represented by Victorian-era writers concerned about their environs. He has published in ELH, EuropeanRomantic Review, and The Coleridge Bulletin. He also belongs to an interdisciplinary research program, featuring Literature and Arts, as part of St. Catherine's College, Oxford.Jillmarie Murphy is a Professor of English and Director of the Gender, Sexuality, and Women's Studies Program at Union College, Schenectady, New York. Her research interests and publications employ the psycho-social paradigm of attachment theory, drawing on topics considering gender, race, class, and ethnicity and their relationship to human-to-human, human-to-place, and human-to-animal bonding in literature. She has several publications that engage archival research and provide a lens through which to consider the evolution of literary history. She has published three books: Hawthorne inHis Own Time (University of Iowa Press, 2007), Monstrous Kinship: Realism and Attachment Theory in the 19th and Early 20th Century Novel (University of Delaware Press, 2011), and Attachment, Place, and Otherness in Nineteenth-Century American Literature: New Materialist Representations (Routledge, 2018). She is also a contributor to The Oxford Handbook of Early American Literature (2008) and Emerson in Context (2014).