Inside Secret Societies: Behind the Scenes of the Knights Templar, the Order of Assassins, Opus Dei, the Illuminati, Freemasons, & Many More (Hardcover) 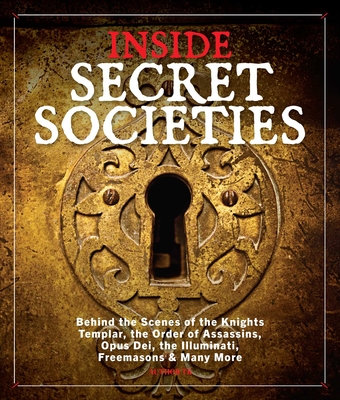 Inside the world's most mysterious groups. Explore their surprising origins, powerful members, and fascinating rites and rituals.

For centuries, humans have had a fascination with secret societies. Some societies that are hundreds of years old — like the Illuminati and the Freemasons — are still relevant today. Or, at least, they are thought to be. But why? After all this time, why do people still care about things like that? What is it about secret societies that so intrigues us? Is it the exclusivity? The desire to belong in a place where others can’t? What are they up to behind those walls, do they know something I don’t? Perhaps it’s the secret nature of it, with special handshakes and rituals and customs. Whatever it is, Inside Secret Societies gets to the bottom of it. We’re taking the oath to reveal some of the more secretive of the secret societies, as well as some of the less secretive ones. Packed with plenty of minutiae and little known facts, this will be popular addition to those into manifestos.

Neil Turitz is an award-winning filmmaker and journalist. Born and raised in Portland, Maine, he moved to New York City for college. He never left. In the years since, he has been working in and writing about Hollywood. His journalistic work has appeared in a variety of publications such as Cosmopolitan, The Hollywood Reporter, Variety, Emmy Magazine, The New York Times, and TV Guide, among a plethora of others (and there is a chance that a movie you've seen over the past several years has some of his dialogue in it). He is a lifelong horror movie fan and still lives in New York, with no immediate plans to leave. Unless, of course, the zombies come. Then he's gone.