We Refuse to Be Enemies: How Muslims and Jews Can Make Peace, One Friendship at a Time (Hardcover) 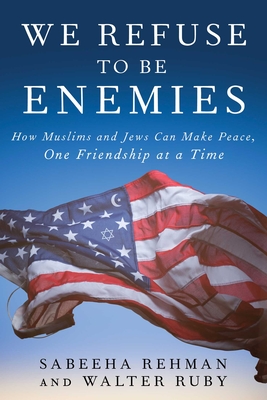 For readers of The Faith Club, Sons of Abraham, and The Anatomy of Peace, a call for mutual understanding and lessons for getting there
We Refuse to Be Enemies is a manifesto by two American citizens, a Muslim woman and Jewish man, concerned with the rise of intolerance and bigotry in our country along with resurgent white nationalism. Neither author is an imam, rabbi, scholar, or community leader, but together they have spent decades doing interfaith work and nurturing cooperation among communities. They have learned that, through face-to-face encounters, people of all backgrounds can come to know the Other as a fellow human being and turn her or him into a trusted friend. In this book, they share their experience and guidance.

Growing up in Pakistan before she immigrated to the United States, Sabeeha never met a Jew, and her view was colored by the Israeli-Palestinian conflict. In his youth, Walter never met a Muslim, and his opinion was shaped by Leon Uris's Exodus. Yet together they have formed a friendship and collaboration. Tapping their own life stories and entering into dialogue within the book, they explain how they have found commonalities between their respective faiths and discuss shared principles and lessons, how their perceptions of the Other have evolved, and the pushback they faced. They wrestle with the two elephants in the room: the Israeli-Palestinian conflict and polarizing material in their holy texts and history. And they share their vision for reconciliation, offering concrete principles for building an alliance in support of religious freedom and human rights.

"As members of the two largest minority faith communities in America, we must stand together at a portentous moment in American history. Neither of our communities will be able to prosper in an America characterized by xenophobia and bigotry.”—Sabeeha Rehman and Walter Ruby

Sabeeha Rehman is an author, blogger, and speaker on the American Muslim experience. Her memoir Threading My Prayer Rug: One Woman's Journey from Pakistani Muslim to American Muslim, was shortlisted for the 2018 William Saroyan International Prize for Writing, named one of Booklist's Top Ten Religious and Spirituality Books of 2016 and Top Ten Diverse Nonfiction Books of 2017, awarded honorable mention in the 2017 San Francisco Book Festival Awards, Spiritual Category, and chosen as a 2019 United Methodist Women's Reading Program Selection. Excerpts from her memoir were featured in the Wall Street Journal, Salon.com, and Tiferet. Since the publication of her memoir, she has given more than 250 talks in nearly a hundred cities, at houses of worship, academic institutions, libraries, and community organizations, including the Chautauqua Institution, where her lectures have been sold out. Sabeeha has given talks on the art of memoir writing at academic institutions including Hunter College, New York. She is an op-ed contributor to the Houses of Worship column of the Wall Street Journal and New York Daily News. She lives with her husband in New York City.

Walter Ruby is a veteran activist in Muslim-Jewish relations. Since 2008, when he became Muslim-Jewish program director at the Foundation for Ethnic Understanding, he has organized hundreds of twinning events, bringing together tens of thousands of Jews and Muslims in more than thirty countries on five continents, including members of mosques and synagogues and Muslim and Jewish organizations. Ruby has worked as a journalist for more than forty years, mainly for American Jewish and Israeli publications, including the Jerusalem Post, London Jewish Chronicle, Long Island Jewish World, Forward, Maariv, and New York Jewish Week. In addition, he has published articles and op-ed pieces in the New York Times, Wall Street Journal, USA Today, New York Daily News, Los Angeles Times, Christian Science Monitor, Dallas Morning News, and many other venues. He serves as executive director of Jews, Muslims and Allies Acting Together (JAMAAT), a Washington area grassroots interfaith group, and lives in Washington, DC.

"We Refuse to Be Enemies is a gripping account of how our two communities stood up for each other in the face of Islamophobia and anti-Semitism, and a prescription for how we can work together going forward  to buttress pluralism, democracy, and religious liberty in this country. Not to be missed."—Dr. Sayyid Syeed, President Islamic Society of North America (ISNA)
"Sabeeha Rehman and Walter Ruby have written an essential book for the vital and important emergence of a Muslim-Jewish alliance in the United States."—Samuel G. Freedman,  award-winning author of  Jew vs. Jew: The Struggle for the Soul of American Jewry, columnist, and professor at Columbia University Graduate School of Journalism

""Today, Pakistan and Israel do not recognize each other. But here are two brilliant writers—one rooted in Pakistan, the other in Israel—who do recognize, understand, and respect each other. Sabeeha Rehman and Walter Ruby, a Muslim and a Jew, are both proud of their faith traditions, while being wise enough to see the deep ties and bridges between them. Their stories and insights give us some hope for the future of the world, including the Middle East."—Mustafa Akyol, Cato Institute Senior Fellow,  opinion writer For the New York Times, and author of Islam without Extremes: A Muslim Case for Liberty
“This is a unique and remarkably compelling book written as a dialogue between a Muslim woman and a Jewish man. . . . A vital contribution for dialogue and peace between Jews and Muslims.”—Mehnaz M. Afridi, Phd, Holocaust, Genocide and Interfaith Education Center at Manhattan College

“A Muslim woman living in an Orthodox Jewish neighborhood; a Jewish man hanging out with Arab Bedouins in Israel. Their stories of transformation and bringing communities together offers hope for America.”—Wajahat Ali, author of The Domestic Crusaders and contributing New York Times op-ed writer

"Sabeeha Rehman and Walter Ruby’s work is at once daring and careful, forgiving and demanding. They share their stories with disarming honesty, having come to their positions through deep listening and personal experience. This book gives a taste of what real Muslim-Jewish dialogue can look like."—Rabbi Jeffrey Saxe, Temple Rodef Shalom, and Dr. Maqsood Chaudhry, Founder and Trustee, McLean Islamic Center
"A must-read for anyone looking to deepen their own interfaith engagement."—Dr. Catherine Orsborn, Executive Director, Shoulder to Shoulder Campaign
"Given the massive importance of the Jewish-Muslim relationship, I consider Ruby and Rehman’s work to be a prerequisite for anyone interested in interfaith dialogue.” —Dr. Akbar Ahmed, Ibn Khaldun Chair of Islamic Studies at the American University's School of International Service, Former High Commissioner of Pakistan to the UK and Ireland

"An informative and mighty book.”—Our Town

"A compelling case for interfaith dialogue and religious pluralism from start to finish . . . Rehman and Ruby’s book shines when it weaves the writers into the narrative. . . . The pairs' voices give the book its combination of warmth and punch."—Inside Arabia