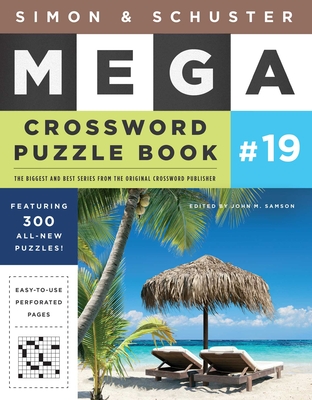 This is book number 19 in the S&S Mega Crossword Puzzles series.

Simon & Schuster celebrates ninety-five years of crossword puzzle excellence with 300 new, never-before-published Thursday to Sunday-sized brain breakers. Sharpen your pencils—unless you dare to use a pen.

Today, 95 years later, Simon & Schuster’s legendary crossword puzzle legacy continues with a brand-new collection of 300 crosswords, which offer hours of challenging fun for puzzle solvers of every level. Created by the best contemporary constructors—and edited by top puzzle master John M. Samson—Simon & Schuster Mega Crossword Puzzle Book #19 is designed with convenience in mind and features perforated pages so you can tear out puzzles individually and work on them on-the-go.

With its timeless and unique collection of puzzles, this super-sized book is sure to delight long-time puzzle stalwarts and new enthusiasts alike.