Once More to the Sky: The Rebuilding of the World Trade Center (Hardcover) 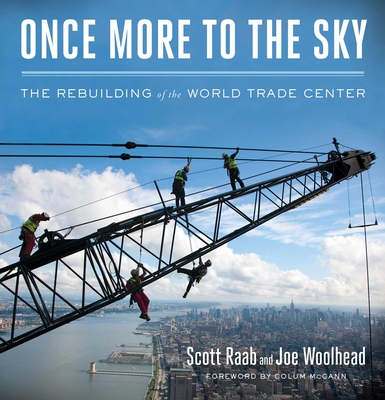 The powerful story of the rebuilding of the World Trade Center, featuring dozens of never-before-seen color photos by the official site photographer.

In late 2014, One World Trade Center—or the Freedom Tower—opened for business. It took nearly ten years, cost roughly four billion dollars, and required the sweat, strength, and stamina of hundreds of construction workers, digging deep below the earth’s surface and dangling high in the air. It suffered setbacks that would’ve most likely scuttled any other project, including the ousting of a famed architect, the relocation of the building’s footprints due to security reasons, and the internecine feuding of various politicians and governing bodies. And yet however over budget and over deadline, it ultimately got built, and today it serves as a 1,776-foot reminder of what America is capable of when we put aside our differences and pull together for a common cause.

No writer followed the building of the Freedom Tower more closely than Esquire’s Scott Raab. Between 2005 and 2015, Raab published a landmark ten-part series about the construction. He shadowed both the suits in their boardrooms and the hardhats in their earthmoving equipment, and chronicled it all in exquisite prose. While familiar names abound—Andrew Cuomo, Chris Christie, Mike Bloomberg and Larry Silverstein, the real estate developer who only a few weeks before 9/11 signed a ninety-nine-year, $3.2 billion lease on the World Trade Center—just as memorable are the not-so-famous. People such as Bryan Lyons, a Yonkers-born engineer who lost his firefighter brother on 9/11 and served as a superintendent on the rebuilding effort. And Charlie Wolf, whose wife was killed in the North Tower and who, in one of the series’ most powerful scenes, weeps on a policeman’s shoulder after delivering her hairbrush and toothbrush for DNA samples.

Once More to the Sky collects all ten original pieces along with a new epilogue from Raab about what’s happened in the years since the Freedom Tower was completed, and why it remains such an important symbol. The four-color book also features dozens of photos—many never-before-seen—and a prologue from photographer Joe Woolhead, the official site photographer for the World Trade Center’s rebuilding.

Publishing to coincide with the twentieth anniversary of 9/11, it is a moving tribute to American resolve and ingenuity.

Scott Raab is a graduate of Cleveland State University and the University of Iowa’s Writers’ Workshop. The author of two books, The Whore of Akron and You’re Welcome, Cleveland, he also spent nineteen years as a Writer at Large for Esquire magazine. He lives in Glen Ridge, New Jersey.

Joe Woolhead was born and raised in Dublin, and has been living in New York City for over thirty years. When the attacks happened on September 11, 2001, he grabbed his camera and shot what he witnessed over the course of three days. His photographs from that time were published all over the world. His work has since been featured in the New York Times, Esquire, the book A Century Downtown, and the documentaries Men at Lunch and The Irish New Yorkers. In addition to collaborating with clients such as Disney and Related, he works with Silverstein Properties documenting the rebuilding at the World Trade Center site and the 9/11 Memorial Museum. He currently resides in Queens with his wife, Ozy, and their son, Chet.

"[An] arresting tribute...the collection presents an inspiring commentary on New York post-9/11...Readers will be moved by this vivid collection." —Publishers Weekly

“A revealing and visually appealing history of an architectural triumph.” —Kirkus Reviews

“Complete with extensive photographs of people and place, this is a comprehensive look at one of the most famous spots in the United States, from a different perspective. This book is meant for readers who like learning background details and want more than a surface-level look at landmarks and monuments.” —Library Journal