Unstoppable: How I Found My Strength Through Love and Loss (Hardcover) 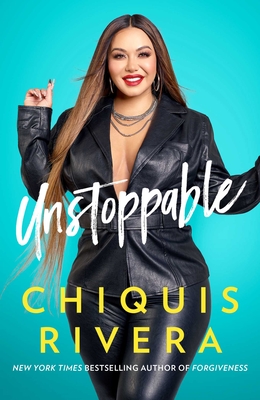 Latin Grammy Award–winning singer-songwriter and author of the New York Times bestseller Forgiveness returns with a new memoir that shares the triumphs, hardships, and lessons of life after her mother’s, Jenni Rivera, death.

Bringing her signature warmth, humor, and positivity to the page, Chiquis Rivera picks up where her memoir Forgiveness left off.

Reeling from her mother’s tragic death, Chiquis finds herself at a major crossroads. As a new parent to her younger brother and sister, she struggles to balance her family’s needs with her dreams of becoming a successful singer and entrepreneur.

Stepping out of the shadow of her mother’s legendary career and finding her own identity as a singer is challenging…but navigating unhealthy relationships proves to be even harder.

When she meets and marries the person she believes is the man of her dreams, it seems like life is finally falling into place. But a dark secret unravels their relationship, and Chiquis emerges stronger as a single woman.

In the end, nothing can keep Chiquis down. Her life philosophy says it all: “Either I thrive or I learn.” Filled with life-affirming revelations, Chiquis ultimately shares her greatest gift with her fans—the accessible lessons that have made her unstoppable.

Janney Marin Rivera—better known as Chiquis—is an artist, entrepreneur, philanthropist, and television personality. She first captivated her audience on reality shows with her late mom, Jenni Rivera, and their family. Chiquis launched her music career in 2014, making her musical debut on international television at the Premios Juventud. Her 2015 memoir,?Forgiveness, was an instant?New York Times?bestseller. In 2020, Chiquis won her first Latin Grammy—her album Playlist, was named the best Banda record of the year. Chiquis lives in Los Angeles. Follow Chiquis on Facebook.com/ChiquisOficial, Instagram @Chiquis and @ChiquisKeto, Twitter @Chiquis626, and YouTube.com/ChiquisOnline.