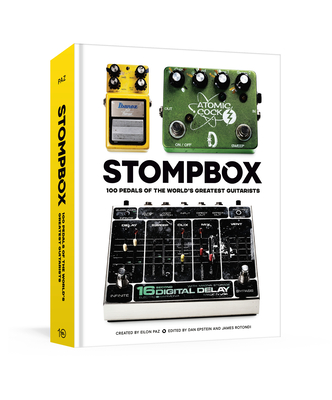 Ever since the Sixties, fuzz boxes, wah-wahs, phase shifters, and a vast range of guitar effects pedals have shaped the sound of music as we know it.

These exquisitely textured fine-art photographs are matched with fresh, insightful commentary and colorfulroad stories from the artists themselves, who describe how these fascinating and often devilish devices shaped their sounds and songs.

Eilon Paz is a Brooklyn-based photographer and art director. His work has appeared worldwide in publications such as the New York Times, Rolling Stone, the Observer, Maxim, Wax Poetics, Saveur, Monocle, Conde Nast Traveler, and Delta Airlines’ Sky magazine, among others. His 2014 debut book, Dust & Grooves: Adventures in Record Collecting, has sold over 25,000 copies to date and is in its third edition. Paz was disqualified from the 2008 Air Guitar World Championships in Oslo for applying the then-unheard B-flat Hexatonic/Odyssey scale to a Britney Spears song. Since then, he’s been focusing his efforts and talents on producing music-related art books.

Dan Epstein is an award-winning, battle-scarred veteran of the rock journalism wars, who has written for Rolling Stone, Revolver, Guitar World, SPIN, FLOOD, the Jewish Daily Forward, and dozens of other publications. As a guitarist, he has recorded with several psychedelically inclined bands, including The Jupiter Affect and Lava Sutra; he has also penned several books on baseball, including Big Hair and Plastic Grass: A Funky Ride Through Baseball and America in the Swinging ’70s. He lives in Greensboro, North Carolina.