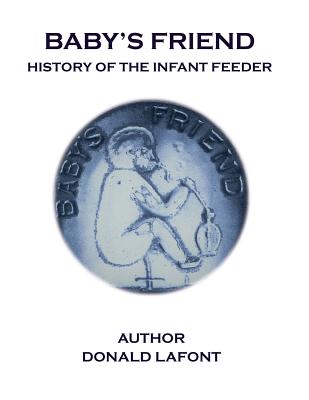 In his debut book Baby's Friend History Of The Infant Feeder, Doctor Donald Lafont shows us how infant feeders have evolved from ceramic urn like vessels to the modern day feeders that babies and mothers are so accustomed to. Since the beginning of time, humans have been concerned with the feeding of children. Childbirth was not without its medical problems. The death of the mother caused alternative methods of feeding the new born. Wet nursing was available to those who had accommodating family and friends, or could afford to pay for this service. More often than not, raising the infant from farm animals milk through various utensils was available and convenient. However as we will see later, some of these utensils were not beneficial to infant mortality. In this book you will also see how infant feeders on both sides of the Atlantic started evolving differently. There are also examples of infant feeders used in parts of Europe that were copied in parts of the USA. Some of the infant feeders seen in this book might be seen today as being quite complicated and eccentric. At the time though they were the product of current thinking and acceptance in society. With infant feeders that we see today, many of their attributes have been founded in the past. An example of this is the rubber nipple seen on bottles. The babies of today can thank Elijah Pratt of New York who in 1845 is credited with the invention of the black rubber nipple. This first rubber nipple however tasted bad and disintegrated when boiled. Through continuous improvements, the defects of this first rubber nipple have been overcome and have made it pliable enough to be stretched, boiled, and used many times. Feeding bottles in this book come in all shapes and sizes. They were made from most all materials readily available at that time in history.

Doctor Donald Lafont is a retired pediatrician and lives in Jackson, Tennessee where he has spent most of his working life. While officially retired, Don still makes time to participate in regular medical missions to Haiti and numerous community initiatives in his home town When he is not practicing medicine, you'll find Don and wife Joyce going through antique malls looking for that next unusual infant feeder, bottle or piece of Blue Willow Pattern.