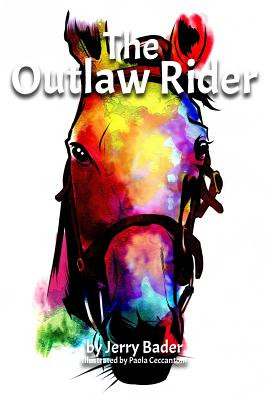 Jesse James, the daughter of a deceased mob connected rug salesman, becomes a jockey working for the Hong Mian triad in order to feed winners to State Senator Somersby. The Senator is responsible for approving California gaming licenses. To date, only Native CANGV casinos are allowed to have slots. California horse racing will die if they aren't allowed to add slot machines to their venues. Benson Yeung, Dragon Head of the Hong Mian triad, and his chief lieutenant, Johnny Luck, have a plan to force Somersby to approve their Native partner's demands for off-reservation gaming licenses. At the center of the plan is a unique white thoroughbred Spirit horse, prized by Native people, appropriately named Medicine Hat.

The Outlaw Rider is the first in a series of books that follows the adventures of, Jesse James, a young woman who is orphaned when her mob connected father suddenly dies. Jesse is taken in by Chinese triad big shot Johnny Luck. Jesse is trained as a jockey in order to serve the interests of the Hong Mian triad led by Dragon Head, Benson Yeung.

The Outlaw Rider is fiction but is set in a true-to-life environment where racetracks in California, as elsewhere, are desperate to add full fledge casinos and especially slots to their venues. The problem is only Native American groups are eligible for casino licences and corruption abounds. Thousands of Native Americans that can trace there heritages back to the 1800s have been disenrolled (loss of Native status) by the groups that control the casino licenses. Disenrollment reduces the number of Native Americans collecting casino benefits that can be as much as three hundred thousand dollars per person.

In the middle of this is a Spirit Horse, called Medicine Hat, a white thoroughbred racehorse with milk chocolate markings including the ears, thus the name, Medicine Hat. The horse becomes the center piece of a fight for control of the casino gaming business in California involving a corrupt State Senator, his billionaire heiress sister, the Hong Mian triad, the Buffalo mob, and two rival Native American groups with Jesse and Medicine Hat in the middle of it all.