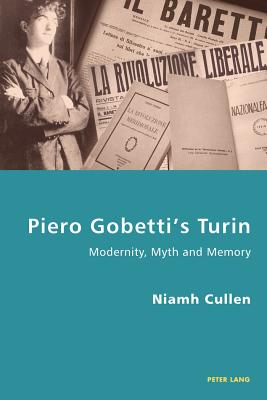 This is book number 12 in the Italian Modernities series.

In his brief public career, Piero Gobetti was one of the most outspoken and original voices of early Italian antifascism. Before his sudden death in 1926, he founded and edited three periodicals, including the fiercely antifascist La Rivoluzione Liberale and the literary journal Il Baretti. While much has been written about his antifascism and his theories of 'liberal revolution', this book considers him primarily as an 'organiser of culture' and situates him both in the context of his lived experience in Turin after the First World War and in a wider European panorama. Although politically marginal by 1918, Turin was one of Italy's most modern cities, with its futuristic Fiat factories, vocal working class and militant socialist intellectuals such as Antonio Gramsci. The book explores Gobetti's encounters with Turin - both its history and the modern, urban landscape of Gobetti's own day - as central to his thinking. Historically and geographically, Turin was also the Italian city closest to France and northern Europe. If Gobetti's immediate surroundings inspired much of his thinking, his sensibilities were - in true Piedmontese style - more European than Italian, and his ultimate impact far from only local. Finally, Gobetti's bitter disillusionment with liberal and fascist Italy, as well as his refusal to fit any of the conventional political labels, means that his memory has remained contentious right up to the present day. This groundbreaking new study explores the roots of Gobetti's thinking, his impact on Italian culture and his controversial legacy.

Niamh Cullen is a graduate of the School of History and Archives, University College Dublin, where she is an IRCHSS postdoctoral research fellow. She specialises in modern Italian social and cultural history and is currently researching dress and social change during the Italian 'economic miracle'.