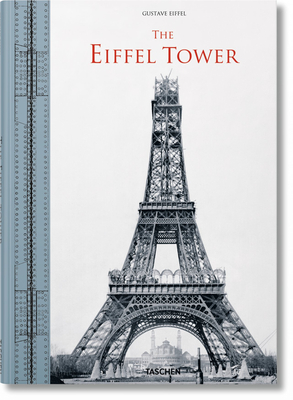 By Bertrand Lemoine
This item is not available.
Out of Print

"The Tower is also present to the entire world...a universal symbol of Paris...from the Midwest to Australia, there is no journey to France which isn't made, somehow, in the Tower's name."

When Gustave Eiffel completed his wrought iron tower on Paris's Champ de Mars for the World's Fair in 1889, he laid claim to the tallest structure in the world. Though the Chrysler Building would, 41 years later, scrape an even higher sky, the Eiffel Tower lost none of its lofty wonder: Originally granted just a 20-year permit, the Tower became a permanent and mesmerizing fixture on the Parisian skyline. Commanding by day, twinkling by night, it has mesmerized Francophiles and lovers, writers, artists, and dreamers from all over the world, welcoming around seven million visitors every single year.

Based on an original, limited edition folio by Gustave Eiffel himself, this fresh TASCHEN edition explores the concept and construction of this remarkable building. Step by step, one latticework layer after another, Eiffel's iconic design evolves over double-page plates, meticulous drawings, and on-site photographs, including new images and even more historical context. The result is at once a gem of vintage architecture and a unique insight into the idea behind an icon.