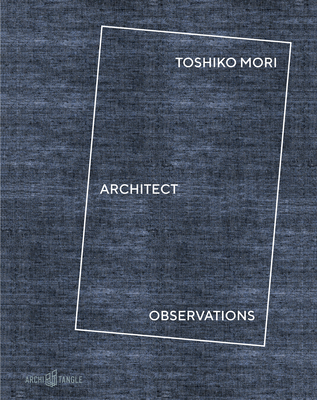 For over three decades, the firm Toshiko Mori Architects has been dedicated to designing ecological, technologically innovative architecture at the forefront of "the social turn in architecture", as Andres Lepik calls it in the foreword. When the firm's founder Toshiko Mori, a New York local with Japanese roots, joined the Harvard University Graduate School of Design (GSD), she became the first female faculty member. Later she sat as Chair of the Department from 2002 to 2008. Many of her architectural projects have received international acclaim, as has she herself, with awards such as the Architectural Record's 2019 Women in Architecture Award for a design leader, and the AIA/ACSA's Topaz Medallion for Excellence in Architectural Education - the highest distinction for teaching in the field.

The focus of Toshiko Mori Architect Observations is on observations as the foremost, indispensable method in the developmental process of architectural projects. TMA projects are geared toward creating infrastructure for the development of society. The wide sense in which the word infrastructure is used in the book gives an impression of the conceptual nature of Toshiko Mori's work.

In the eight chapters of this publication, projects are introduced which foremost consider social and ecological demands such as community building. Backed by thorough research and engaged with architectural tradition while also questioning industry norms, the projects remain on the cutting edge of the architectural profession. They include a think-thank called VisionArc which Mori founded together with Landon Brown, the award winning Thread and Fass School and Teachers' Residence in Senegal and several curatorial works at the MoMA and Smithsonian museums. The vast variety of projects featured in the publication illustrates Mori's philosophy that there is no universal design solution for every problem, which makes each of her architectural engagements unique.