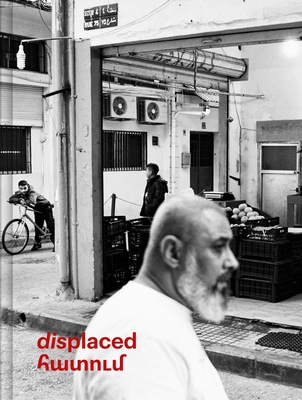 Photographer Ara Oshagan and author Krikor Beledian grew up in Beirut's Armenian communities formed by refugees and survivors of genocide. They came of age in families and streets fraught with the collective memory of extreme violence and dispossession.
Both left Beirut decades ago and now return, carrying their own histories of displacement, to immerse themselves in its fractured urbanscape.
Oshagan wades through the spaces and narrow neighborhoods of his past to create dark and lyrical photographs that straddle the line between documentary and narrative: an attempt to articulate his own ambiguous relationship to place and history. While Beledian, the preeminent author of the Armenian diaspora, drawing from his decades-long research and several novels about these communities, pens an original and poetic semi-autobiographical text based on his own youth in the same spaces.
Set in Beirut's dense Armenian neighborhoods of Bourj Hammoud, displaced brings these two symbiotic and deeply personal works of literature and photography together: a unique collaboration interrogating diasporic identity, multi-generational displacement, and the ambiguities of narrative. Bilingual edition in Armenian / English

Ara Oshagan(b. 1964), is a photographer and installation artist adressing issues of displacement, identity and memory. Among the best-known Armenian documentary photographers in the world, he has presence in multiple photographic spaces. His work has appeared in leading galleries and newspapers. His best-known works include a ground-breaking series on Armenian Genocide survivors published in The Los Angeles Times and critically- acclaimed first monograph Father Land published by powerHouse books in 2010. In 2016, he published his second monograph, Mirror: about diasporic creative spaces and processes. Oshagan is also an installation artist with recent major projects in Armenia and Los Angeles. In 2015, Oshagan was selected as one of 100 "Leading Global Thinkers" by Foreign Policy Magazine in Washington DC. He has exhibited his work worldwide with solo exhibitions at the LA Municipal Art Gallery, the Downey Museum of Art and the Armory Center for the Arts in Pasadena. With awards from the Santa Fe Center for Visual Arts, Photolucida and the Armenian National Committee, Oshagan has also received grants from Open Society Institute, the California Council on the Humanities, Center for Cultural Innovation, Los Angeles City Department of Cultural Affairs and AFFMA Film Foundation. Oshagan has presented his work at the Annenberg Space of Photography, International Center of Photography in NY, TEDx Yerevan, and academic conferences. Oshagan was born in Beirut and is the son and grandson, respectively, of famed Armenian writers Vahe and Hagop Oshagan. Oshagan resides in Los Angeles. He is fluent in English and Armenian.