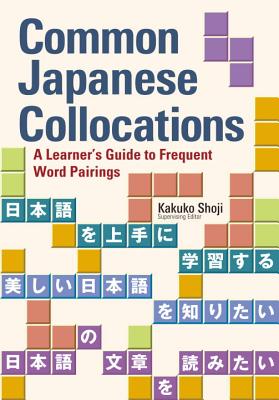 By Kakuko Shoji (Editor)
This item is not available.
Out of Print

Collocations are word combinations that occur in natural speech more frequently than can be explained by chance. In English, we say, "take a bath" (or "have a bath" in British English), but in Japanese the equivalent is "get in a bath," o-furo ni hairu. The verb hairu is the one that collocates with o-furo. It has long been recognized that the study of collocations can lead to more natural language production, and yet until now there has been no book on the subject for learners of Japanese. Common Japanese Collocations will be the first resource to introduce the most frequently used noun-and-verb and noun-and-adjective combinations. The book is divided into six thematic chapters centering on daily life. Each chapter presents more than a hundred key entries, which consist of a noun and a selection of words that go with that noun. Some collocations come with example sentences that demonstrate how the word pair can be used in a sentence. In addition, throughout the book there are notes on common usage errors.

KAKUKO SHOJI has been an instructor of Japanese at the University of Hawaii since 1968, and is the author of Basic Connections and Japanese Core Words and Phrases (both published by Kodansha International). Shoji was also the supervising editor of Kodansha's Effective Japanese Usage Guide.