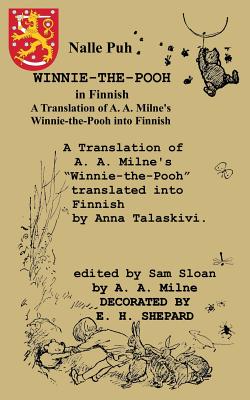 Winnie-the-Pooh is the most popular children's book in the world and in Finland. Finnish is a language read and spoken by six million people in Finland and in parts of neighboring Sweden. There appear to be at least a million speakers of other closely related languages or dialects outside of Finland. This translation of this book into Finnish is by Anna Talaskivi. After Winnie-the-Pooh came out in 1926, Anna started translating the stories into Finnish. They were published as a book in 1934. A second book, "The House on Pooh Corner," was translated into Finnish by Annikki Saarikivi. It is not known whether Annikki Saarikivi is the same person as Anna Talaskivi. These two books have the same cover.