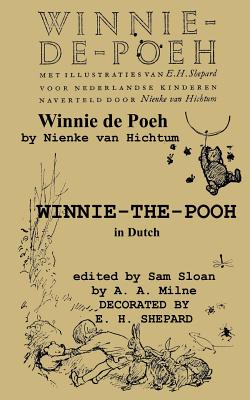 By A. A. Milne, Nienke Van Hichtum (Translator), Sam Sloan (Introduction by)
$9.99
Email or call for price.

I have already published another translation of Winnie-the-Pooh in Dutch. That translation is available as ISBN 4871872963.

We have also published Winnie-the-Pooh in the Afrikaans Language ISBN 4871877906. Afrikaans is primarily the language of the "coloured people" of South Africa, people of mixed Dutch and African ancestry. It is said to be 90% to 95% Dutch.

Dutch is spoken by 23 million people as a first language, including most of the population of the Netherlands and about sixty percent of Belgium, and by another 5 million as a second language. Dutch is also spoken by the "Pennsylvania Dutch" or Amish people in Lancaster Pennsylvania and by 17 million Afrikaans who speak a variety of Dutch in South Africa. Dutch is also spoken in Suriname, Aruba, CuraCao and Sint Maarten. The former Dutch colony of Indonesia still has some Dutch speakers.