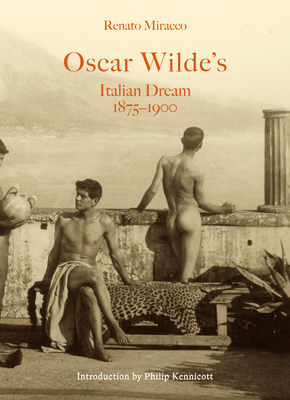 Italy as a haven of gay liberty: a grand tour with Oscar Wilde, featuring previously unseen photographs and archival materials

In Oscar Wilde's Italian Dream 1875-1900, leading Wilde scholar Renato Miracco combines written research with previously unseen visual material ranging from Wilde's earliest heady trips to Italy as an Oxford student to recently released court documents from his trial and his final days in France and Italy in 1900, after his incarceration in Reading Gaol, and his voluntary exile from Britain. Italy, and the larger world beyond London, was essential to the sensitivity and awareness of Wilde's identity, his contributions to prison reform and his challenges to social norms and sexual stereotypes in his last years. It also offered a great deal of sexual liberty compared to the oppressive moral atmosphere of England at that time.

The previously unseen images Miracco has incorporated in this volume (including photos that Wilde received from the gay German photographer Wilhelm von Gloeden) are mainly from private collections, and together with letters, reminiscences and magazine and newspaper articles (along with derogatory articles about Wilde from the Italian press) they play a key role in placing Wilde's character, and an entire generation, in a complex context. Oscar Wilde's Italian Dream 1875-1900 is a major addition to the canon of one of the world's greatest literary figures. Renato Miracco (born 1953) is an Italian art critic and curator. He was awarded the Order of Merit of the Italian Republic for Cultural Achievements in 2018. He served as Cultural Attach for the Italian Embassy in Washington from 2010 to 2018 and as advisor to the Ministry of Foreign Affairs of Italy. Miracco has curated major exhibitions for Tate Modern in London, the Metropolitan Museum of Art in New York and London's Estorick Collection. His passion for Wilde dates from the early 1980s when he wrote his first essay on Wilde's time in Italy. This new book on Wilde is based on new materials that Miracco has found over the last few years.