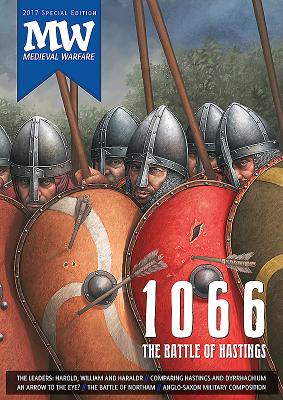 The 2017 special issue of Medieval Warfare takes a look at one of the most famous battles in the history of the British Isles. Our detailed analysis of the Battle of Hastings by expert writers and medievalists not only looks at the engagement itself, but examines the leaders, their armies, the immediate aftermath, and the broader effect on history and popular imagination. Articles in the 2017 Special include: - Kelly DeVries, 'Two invasions, three battles, one throne - The contenders in 1066'.
- John Gillingham, 'The path for William, Duke of Normandy - The conqueror's apprenticeship'.
- Ad van Kempen, 'The path for Harold Godwinson - How do you become a king?'.
- Richard Abels, 'The men who fought with King Harold - The Anglo-Saxon mlitary'.
- Megan Arnott, 'The path for Haraldr Hardr di Sigurdarson - Hardrulers of the Vikings'.
- Danielle Turner, 'The Vikings' last stand in England - The Battles of Fulford and Stamford Bridge'.
- Ilana Krug, 'The logistics of the Norman Conquest - Crossing the Channel'.
- Kelly DeVries, 'A meeting of missles and sword-strokes - The Battle of Hastings'.
- Michael Livingston, 'The legend that just won't die - The arrow in King Harold's eye'.
- George Theotokis, 'Hastings versus Dyrrhachium - The myth of the "invincible" Norman cavalry charge'.
- Dani le Cybulskie, 'Great was the multitude of the slain - William I's subjugation of England'.
- Nick Arnold, 'Great was the multitude of the slain - The Battle of Northam'.
- Luke Foddy, 'The 950th anniversary of the battle - A return to Hastings'.
- Peter Konieczny, 'Harold lives William kills his wife The alternative histories of The Battle of Hastings'.
- Peter Konieczny, 'Learn more about the Norman Conquest - Further reading'.