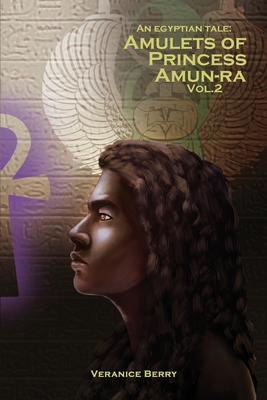 THE GODS OF EGYPT HAVE MET THEIR MATCH... OR HAVE THEY CREATED IT?
Pharaoh Zarhmel is at odds with the princess, while Neenho finds himself trying to come to terms with who his aunt Adallah truly is. With the new information and one amulet in hand, all signs are starting to point to the Queen of Egypt.
Neenho and Izzi gain allies from a village that was rumored to be extinct. With the help from the enormously strong Kemetians, and Kade, Assim, and the mischievous twins, the group stumble into underwater territory, and the battle to obtain the other two amulets rages on.
Anubis, Montu, Wadjet, and Nekhbet do not trust the power in the hands of the children. Isis, Thoth, Horus, and Hathor fight to keep Amun's secrets hidden. With the queen tied into the mystery and the brother of the pharaoh wanting the amulets for himself, Izzi and Neenho struggle with the Gods of Egypt, who are not on their side.
Neenho and Izzi may be powerful, yet they are powerless to face the truths that lie with the amulets.

I ALWAYS DREAMED of meeting the princess, but now that Izzi-Ra is in my life, I kind of regret that wish. It was just me and my aunt Adallah. Well, so I thought. We didn't have much, but we had each other.
After bumping into the princess and being carried away to a hidden glass pyramid and told I need to find and control the Amulets of Princess Amun-Ra before the evil Drahzil does, well ... I would rather continue being chased by the village bullies
The gods fear me, and with each encounter, I learn something new-our makers are not what they are etched to be in the temples. Between cursed mountains, an under-water palace, and the mystery surrounding my birth, all the secrets and lies point toward the Queen of Egypt. What is she hiding?
I was just Neenho, the scrawny nobody from Pakhet, and now ... Who am I? As we unearth each Amulet, Izzi and I lose a bit of ourselves as the power grows within.