Our Grandfathers Were Braceros And We Too... (Paperback) 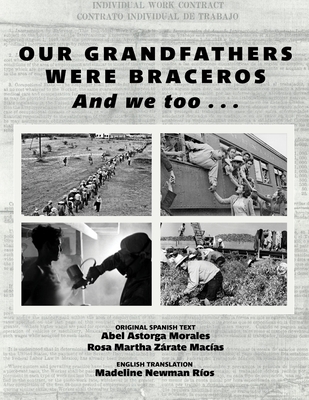 A TENACIOUS STRUGGLE FOR JUSTICE

"OUR GRANDFATHERS WERE BRACEROS AND WE TOO," is an excellent work of tremendous relevancy for our times, given its focus on the issue of migration and, above all, for keeping the struggle alive against the violations of labor and human rights seen in temporary worker programs. Authors Abel Astorga Morales and Rosa Martha Z rate Mac as share an intense, painful chronical with us, but one that is also full of the lessons handed down by peasants and indigenous peoples who participated in the Bracero Program between 1942 and 1964. This book faithfully compiles the historic memory and testimonies of Braceros living in the United States, setting a momentous precedent that the Mexican population in the country to the North will have in the twenty-first century.

The majority of protagonists of this history have now departed, without recovering the fruits of so many years of their labor, while a few survivors and family members still wait for justice to be done. As a people, they have grown and developed in the North, and have real possibilities for making a social, political, economic, spiritual, and cultural impact.

Abel Astorga Morales, PhD, a Professor at Universidad del Valle de Atemajac in Guadalajara, Jalisco, Mexico, earned his Doctorate in Social Sciences and a Master's Degree in the History of Mexico from Universidad de Guadalajara. His lines of research include the Bracero program, social movements, and Transmigration of Central Americans through Mexico.

Rosa Martha Z rate Mac as has resided in California since 1966. She is a retired teacher, singer-songwriter, people's educator, and founder of Librer a del Pueblo, A.C. Since 1966 she has collaborated in developing community projects in Mexico and the United States, and for the past 20 years has participated in the social movement of Braceros. Since 2007 she has been the coordinator of the Alliance of Ex Braceros of the North 1942-1964.

Madeline Newman R os, M.A., a certified freelance interpreter and translator, is the former director of the Guatemalan Education Action Project and editor of its Guatemala Review publications. Her pro bono work has included interpreting for asylum cases and organizing interpreting teams for indigenous consultant organizations at the United Nations.