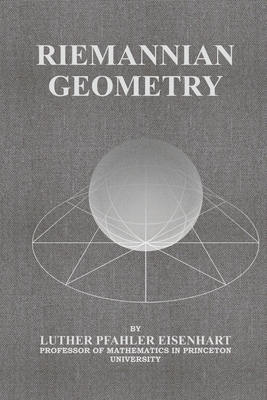 The recent physical interpretation of intrinsic differential geometry of spaces has stimulated the study of this subject. Riemann proposed the generalization, to spaces of any order, of the theory of surfaces, as developed by Gauss, and introduced certain fundamental ideas in this general theory. From time to time important contributions to the theory were made by Bianchi, Beltrami, Christoffel, Schur, Voss and others, and Ricci coordinated and extended the theory with the use of tensor analysis and his Absolute Calculus. Recently there has been an extensive study and development of Riemannian Geometry, and this book aims to present the existing theory.

Throughout the book constant use is made of the methods of tensor analysis and the Absolute Calculus of Ricci and Levi-Civita. The first chapter contains an exposition of tensor analysis in form and extent sufficient for the reader of the book who has not previously studied this subject. However, it is not intended that the exposition shall give an exhaustive foundational treatment of the subject.

Most, if not all, of the contributor's to the theory of Riemannian Geometry have limited their investigations to spaces with a metric defined by a positive definite quadratic differential form. However, the theory of relativity deals with spaces with an indefinite fundamental form. Consequently the former restriction is not made in this book. Although many results of the older theory have been modified accordingly, much remains to be done in this field.