Arduino programming for beginners: How to learn and understand Arduino hardware and software as well as the fundamental electronic concepts with this (Paperback) 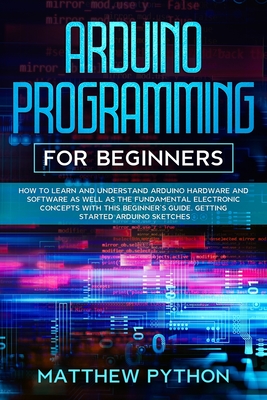 Would you like to control switch, LED, and so on by simply programming them with a single board, even without changing the board itself when something goes wrong?
Arduino is a fascinating platform used to build electronic projects. It is preferred by a lot of experts just starting out electronic projects.
That is because of the ease of operation that it offers and its wide range of simple versions that you can try. The Arduino board is processed to use simple chips called Microcontrollers. It uses these with its Microcontroller board.

Coding with an Arduino program can make it pretty easy to control your electronics. You may control switch, LED, and so on by simply programming them with Arduino board. You don't have to change the whole board when something goes wrong, each faulty microchip can be easily replaced. Besides these, it is cost effective than other most of the other programs.

The surprising news is that despite being a very thrilling program, a lot of people do not understand how Arduino program works. Many tried to operate it without learning, they found it impossible so they gave up. Similarly, research shows that a lot of interested amateurs tried to learn Arduino programming too, but they made no breakthrough because their teachers knew too little or could not break things down for them. Arduino is too intriguing to be dumped. It is for the purpose of those who do not have any background in Arduino programming that the Matthew Python and the editorial team have put together a masterpiece that can give a bit by bit guide to every beginner interested in learning Arduino.

"Arduino Programming for Beginners: How to learn and understand Arduino hardware and software as well as the fundamental concepts with this beginner's guide. getting started Arduino Sketches" by Matthew Python

This books can teach you every basic knowledge you need to have about Arduino programming. Ranging from the keywords to the terms and operation. It is packed with a lot of installation, sketching and control steps that makes it hard for anyone to miss the lessons. You will find help on how you can troubleshoot when you need to, the function of I/O, FTDI chips and so on. If all you knew was the term 'Arduino program' earlier, this book provides details of everything you are missing.

Among others, you will learn:

Wouldn't you like more to know more about this operation? Getting this book is how you can learn it all yourself, you will realize how the full concept of Arduino and you can try it out yourself.