The Dirty on Billy the Kid (Paperback) 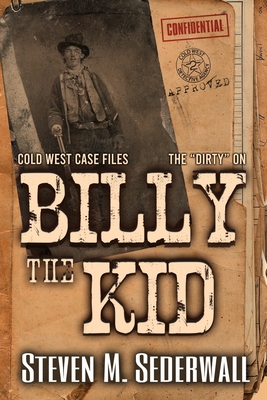 The one and only time Billy the Kid made the front page of the New York Times was when Cold West detective Steve Sederwall re-opened the century old cold case of two deputies murdered by the notorious outlaw when he escaped from the Lincoln County Jail. Now, for the first time, Steve tells the story of his investigation in detail.
Excerpt
"The Little Rat-Bastard", was pretty much the kindest description I could muster for Billy the Kid. I saw him as little more than saddle trash, on the opposite side of everything for which I've ever stood and as a result, I had no use for this buck-toothed derelict. I've worn a badge my entire adult life, I bleed blue, and admittedly it's from that perspective I had formed my opinion. As a result, I had no problem with Pat Garrett voiding this scumbag's birth certificate. Well, that is until I saw the "dirty". Everyone has a secret they hope will remain hidden; cops call that "the dirty". It's not until you see the dirty do you understand the entire truth. When secrets are hidden, there's someone who doesn't want the truth known.Cops understand the truth cannot be reached until you see the raw evidence and facts void of the spin. You'll overlook the dirty if you're unable to pick up the "tells". Those signs, always present, pointing to the evidence, which, if followed, will drop you off at the doorstep of truth.In a criminal investigation, you may find evidence pointing to guilt, or uncover evidence clearing the suspect; in legal jargon, the evidence in the suspect's favor is called exculpatory. The state is bound by law to disclose exculpatory evidence; however, the same does not apply to history. In the case of Billy the Kid, the exculpatory evidence has never been presented. The story has always been filtered through what historians "thought", knowledge gained through the reading of documents. As a result, we've been spoon-fed that version of history, which gave birth to the "legend". However, legend and truth ride different horses. Legend by definition is a non-historical, unverified story, passed down through the years. In other words, a legend is an unproven story accepted as history. Pay close attention and you'll notice the words "legend" and "history" are used interchangeably, even though they have different meanings.In the search for truth, the detective knows both witnesses and suspects, in words and actions, unknowingly provide "tells". As a suspect becomes nervous and their eyes dart about, they're telling you they're about to run or fight. If they look up before answering or take a long pause, more often than not, they're searching for a plausible lie. Justifying normal actions, unnecessarily filling in gaps, providing pointless details, or a lack of detail when required, are "tells"; you're being led away from the truth. If the question is parroted back with one or two words changed, a lie has just been laid at your feet.In the case of Billy the Kid, a glaring "tell" can be found in the transcript of the Court of Inquiry into the actions of Colonel N. A. M. Dudley. Early in the trial, a witness' accused George Peppin of stealing a pair of pants from the Tunstall store, after Tunstall's death. On June 10th, 1879, Peppin took the stand. Since he was a friendly witness, Colonel Dudley didn't want him looking like a common thief, stealing from a dead man. So, the Colonel did his best to rehabilitate the testimony of the ex-sheriff.Dudley asked, "Did you have a pair of pants or blanket under your arm at any time when you went out of the Tunstall Store the morning of the 20th of July, last, or did you remark at the time of leaving the store that morning, 'By God, I will pay for it some of these days.' Or something to that effect?" Peppin snaps back, "I did not have a pair of pants or blanket over my arm." To the casual reader, Peppin denied being a thief; to the cold case detective, he just confessed.