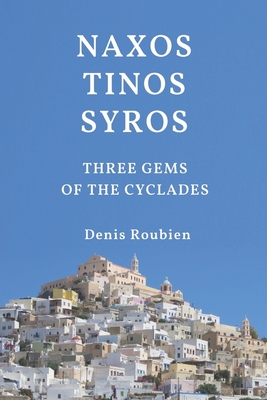 You want to discover the natural and cultural treasures of three of the most extraordinary Greek islands from an expert? This is the book for you

You will see this is not just another Greek islands travel guide.

In this book you will discover, through a travel story and a large number of black and white photos with concise historical and architectural explanations, the known and unknown treasures of three of the most extraordinary islands of Greece.

Naxos. Having been the cultural and political centre of the Cyclades from ancient times to the Middle Ages, Naxos boasts a wealth of cultural treasures, covering a wide time range. The island's spectacular beaches resulted in the treasures of the hinterland remaining unknown to the wide public.

Among other things, you will discover

-the most impressive kouroi of ancient Greece

-temples that are considered the precursors of the Parthenon

Tinos. Last possession of Venice in the Aegean and thus last bastion of the Western World in the Eastern Mediterranean, Tinos boasts a wealth of cultural treasures, set in an exceptional landscape. The fact that the church of the Virgin Mary in its port became the main pilgrimage of Greece resulted in the treasures of the hinterland remaining unknown to the wide public.

Among other things, you will discover

-the island's marble craftsmanship, inscribed on the Representative List of the Intangible Cultural Heritage of Humanity

A shelter from pirates, a cultural centre with some of the first schools in Greece and today a rare medieval fortified town

The former residential, cultural, commercial, and industrial centre of Greece. The world's largest neoclassical ensemble. A feast of images

Although these treasures are presented to you through a hiking tour, even if you don't hike you can see them, since you can also reach them by car.

The author of this book holds a PhD in Architectural History from the National Technical University of Athens and a master in heritage preservation from the Ecole de Chaillot of Paris. He is a professor in the University of the Peloponnese, where he teaches these subjects. He is also a fervent cultural hiker.

His travel books (mostly about Greece) are addressed to you, the reader with a special interest in cultural sites. In order to help you better understand and remember these sites, they are written as a guided tour. They include encounters with interesting people and other personal travel experiences which will help you organize your own trip beyond the tourist clich's.

Pick up your copy today by clicking the BUY NOW button at the top of this page.